Stephen Overbury, creator and curator of the Naismith Collection at the Almonte Old Town Hall, is a man with a passion for the authentic. As a dealer in antiques and collectibles he  says he knows about the “meaning and meaninglessness of stuff”. His interest in antique pens led him to Japan to research a book on Japanese lacquer pens published as Namiki, the Art of Japanese Laquer Pens. It was there, while living in a small Japanese farming community, that he picked up a copy of the Japan Times and found that a collection of James Naismith artifacts were for sale by a major American auction house for collectibles. Stephen, who was raised in Montreal, is passionate about basketball. In childhood, he saw his first basketball game at McGill and in Japan played on two basketball teams. As he noted, basketball, invented by James Naismith in 1891, is played in every country in the world. He immediately recognized the importance of this collection and bid on it. He was concerned that it would be broken up as a collection and would never be shown publicly, particularly to Canadians.

Stephen, who has a background in TV production and news, believes that he has a good visual sense and focused on the core of the collection which he recognized was the most comprehensive personal collection of primary sources of this iconic man. At the time he bid and acquired the collection, Stephen had never heard of Almonte Ontario, but in a search to place the collection where it would be publicly displayed, he came to the community and fell in love with it.

Stephen originally wanted to place his collection with another larger institution. He negotiated with the Chinese government at the time of the Beijing Olympics and with the National Basketball Association in the U.S. in an attempt to place it. When he came to Mississippi Mills, he offered it to the Naismith Museum at the Mill of Kintail but it had no budget to acquire it. Stephen has  great respect for the people who run the museum at the Mill of Kintail. It is professionally curated and it was opened after its seasonal closing to accommodate some Japanese guests at Stephen’s request.

Stephen was so taken with our community that he decided to move to Almonte, and in the course of discovering the town turned his attention to Canadian history. He noticed that many talented people live in Mississippi Mills and that there is a kindness to this community that harkens back to the Lanark settlers, many of them poor but loyal subjects of the British Crown when they emigrated. He now feels that Naismith was not one of a kind, but a rather typical product of this region, committed and talented. Naismith was hugely influenced by his life in the Ottawa Valley lumber camps and grew up and taught in the era of muscular Christianity, an era that saw the rise of the YMCA. He went to the States from McGill because the YMCA training college was there. Basketball, Stephen believes, is an expression of Canadian values: respect and fair play and, in his opinion, it is now  played as it was originally intended only by the Japanese for whom respect is a cultural norm.

Unable to place the collection in another institution, Stephen has opened it in a room at the Almonte Old Town Hall. The collection includes the only full manuscript of Naismith’s book Basketball, its Origins and Development, Naismith’s early elementary school report cards, his diary of his trip to the 1936 Olympics in Berlin, letters from Naismith to his wife, a hand penciled account of his early life, his last letter before his death in 1939 to the Presbyterian College of Montreal (which accorded him an honorary doctorate) explaining his philosophy of life: to leave the world a little better than he found it. Stephen has set up the room as a cozy farmhouse room with furnishings he acquired at Lanark County flea markets. It charmingly replicates the era. He wants people to be able to closely examine the artifacts and to sit down and read the manuscripts.

Stephen disdains the American cult of celebrity which takes an interest in the wealth of the players over the actual inventor of the game. The Basketball Hall of Fame has no budget for anything historical, he says. He knows, he tried to interest it in the collection. He feels that the Hall is Fame is not interested in the true meaning of the sport but only in the rich and famous. His collection, by contrast, is low key, but an important contribution to the historical record of the sport. He subscribes to the philosophy of Canada’s first, great, Dominion Archivist, Arthur Doughty who stated that of all national assets we have, archives are the greatest. They are the gift of one generation to the next and the extent of our care of them marks the extent of our civilisation. Stephen obviously cares and his collection is worth a visit. He charges $10, which seems a steep price for a one room exhibition, but as he says, he has rent to pay for the room and he does have unique items. He also offers bicycle tours of Almonte. James Naismith went to school in Bennie’s Corners but he did live in the town of Almonte for a time. The school Naismith attended is now an apartment building.

The interest in the sport of basketball cannot be overstated. The ostensible first rules of the game sold at Southeby’s recently for $4.4 million. That puts the collection in perspective. $10 for a viewing does not seem so extravagant in that context. 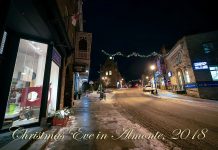 Wishing our readers a safe and happy Christmas 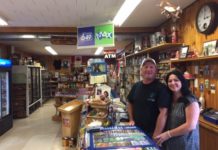 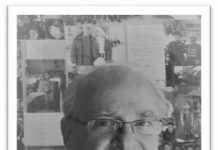 Statement from the Mayor on COVID-19