On March 16th one of Almonte’s own will be front and centre on national TV, facing some of Canada’s savviest business owners when he pitches his business idea to them on CBC’s Dragons’ Den.

Dan Fallak — who was born and raised in Almonte and is the fourth generation of his family to own a business here in town — runs his company Vtile Enterprises Inc from space he leases from the Almonte Sign Company in the Old Broom Factory Building on Robert Street.

You may know Dan as the son of Donna and Hoss Fallak, or as half of the brains behind Small Town Thinking, which made popular Almonte toques, T-shirts, and Christmas ornaments, or as the owner of VersaTile and Coasterly — companies that make marble drink coasters available online and at gift shops, including Cheerfully Made here in Almonte.

But Dan is also the founder of a product called Amazeballs — stainless steel beverage chillers used as an alternative to traditional ice cubes to cool spirits like scotch. You may have seen the product on the shelves in Almonte at Crush Marketplace, or in retail chains across Canada like Chapters/Indigo, Winners and HomeSense.

With the the product’s popularity growing and orders from retailers getting larger, Dan turned to the Dragons for an investment to help expand the business and finance purchase orders.

“The orders were getting bigger and bigger and were approaching the level that I could not afford to lay out the money up front to my manufacturer in order to get the product made to fill them” said Fallak. “It’s a frustrating feeling to know these big players want your product and know that you could grow the business but you’re handcuffed by finances.”

While Dan can’t discuss the show’s outcome, he did say going to Toronto last April to shoot the episode was “the opportunity of a lifetime” and “something I’ll never forget”.

Dan will be hosting a private viewing party for close friends and family but encourages all proud Almontonians to cheer him on during his episode, which will air on Wednesday March 16th at 8 pm on CBC.

Dan said, “Even though I live in Kanata now, Almonte will always be my true home, and it is the location of my business… I was proud to tell the Dragons I’m from Almonte and I hope that it just shows people watching that it does not matter where you live, you can run a company of any size from anywhere nowadays — including “The Friendly Town”. 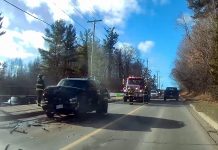 A day of free yoga, January 25