Recently, a Night Sky Friend recently wrote me to me…:

Looking at Mars lately and wondering if you have already or are intending to open up the telescope for a look at that….

Mars has just passed its closest approach to Earth (July 31 2018) . It is the very bright orangey planet (much brighter than a star) in the low southeast, rising after Jupiter and Satun. It has also just passed the point of  opposition. See https://millstonenews.com/2014/04/night-sky-course-planets-earth-and-orbits-around-the-sun.html

This year, 2018, the Mars apparition is similar to the one in 2003 known as the ‘Super-Mars’. Every 15 years or so, the geometry works out that we pass Mars while we are near aphelion (the farthest distance from the sun) and Mars is near perihelion (its closest distance from the sun). When that happens, our two planets are at their minimum distance from one another. When Earth passes a more distantly orbiting planet on the “inside track”, that planet appears in our sky opposite to the sun, … That planet will rise in the east as the sun sets in the west. And because we are closer to it, it will shine brighter than at any other date and look larger in binoculars or a telescope.[courtesy Mars Mania means Opposition…

Why is Mars so low when we see it  near opposition in the Northern Hemisphere?

Mars is bright and close, but for observers in the Northern Hemisphere, this event happens in the summer . Since Mars has to be opposite the Sun for opposition; conditions are such that

Mars – The previous Super-Mars opposition in 2003

Recall that 2003 was the summer of the “Super-Mars” opposition, and a legendary bad-astronomy fake ‘fact’ found its way into the media. People read that Mars would be “the size of the  moon”. In fact, this is probably due to a mis-quoting of the astronomy column in the Old Farmer’s Almanac written by Bob Berman. Bob confesses:

“Not that Mars is immune to hype. In August 2003, we had the closest martian visit in more than 50,000 years, and in the Old Farmer’s Almanac, where [Bob Berman has] been the astronomy editor since forever, I wrote that through any telescope at a mere 100x Mars would look bigger than the naked eye Moon… The fake “Mars is bigger than the Moon” business every single summer stems from that Old Farmer’s Almanac article, with the part about “through the telescope” omitted. [courtesy Astronomy Magazine, August 2008, p. 12).

So what does this mean…that Mars at a perihelion opposition will appear to be 1/2 degree in a telescope when viewed through a telescope with 100x magnification?

Consider how Mars might look in a telescope when its disk is the largest)and compare this to just looking up (without a telescope) to see the Moon when a large portion is lit.

Recently I went out, and tested this perception. I used  a 100x eyepiece for my scope; For a  Pentax XL eyepiece http://www.nightskyinfo.com/eyepieces/#4 the apparent field of view is around 65 degrees. I could count maybe 30 mars diameters on either side of the image; so the apparent size of the disk in the eyepiece was approaching around degree: 65 deg / 60 (mars diameters). Still very small in the eyepiece but not as small as a point source like a star.

When I hold my arm at arm’s length and extend my pinky finger out to the disk of the moon, the finger covers the moon . The moon has an angular measure of 1/2 degree, or 30 seconds of arc. Hold your pinky out over the moon and it will block it from your field of view. These hand measurements help you approximate angular measures in the sky when you are star-gazing with the naked-eye.

Observing Mars through a Telescope

Mars, unlike Saturn and Jupiter, is very difficult to observe when it comes to seeing features and detail on the planet. It requires patience and repeated viewing to confirm that you have seen what is shown in, for example, the Mars Profiler provided by Sky and Telescope: https://www.skyandtelescope.com/wp-content/plugins/observing-tools/mars_profiler/mars.html

At 100x I was unable to see these features. It simply looked like an orange disk with perhaps a hint of a darker shade running across the central portion – perhaps Syrtis Major. I suspect that it takes much higher power and large aperture to tease out any features on Mars.

Perhaps that’s why it’s important to try and observe it when the diameter of the disk is near maximum. Try to observe it soon: because our interplanetary distance increases dramatically through September and October, reducing the elusive portrait of the planet to a disk diameter of 11 ” by the end of October.

One can simply enjoy the colour and the brilliance of Mars night after night, with the naked eye, as it retrogrades its way (moving West to East every night)  along the low-slung ecliptic. The retrograde effect can be felt if you go out night afternight and see that other ‘normal planets’ like Saturn and Jupiter set earlier each night. They have moved further West. But Mars is tugging it’s way backwards – towards the East. Now that’s retrograde behavior! 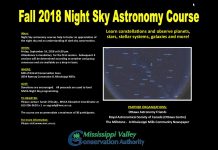