All of a sudden summer is here and my completely unrealistic expectations and plans for gardening are now colliding with the limitations of my energy, budget and the number of hours of daylight in a day. It’s time to step back, say enough and glory in the bounty and beauty that is all around this time of year.

Note to file: Do absolutely all I can do in the fall to clean up and prepare gardens for planting in the spring. There just is not enough time in the spring to do everything that I want to do especially if I want to combine it with another pastime such as birding where the peak migration period is right in the middle of spring gardening season.

It has been great weather for planting the vegetables that like a lot of heat and that are very sensitive to colder temperatures. This week I have planted peppers, eggplant, basil and sweet potatoes. The pepper in the vegetable bed is a medium size pepper called North Star. The amazing thing about peppers is they are edible at every stage of growth of the pepper. If left on the plant many peppers that we pick as green will eventually turn red.

The peppers that I planted in the front yard are a more ornamental variety named Super-Chili that carries the peppers above the plant. I see these increasingly being planted as ornamental plants.

An ornamental Thai basil named Siam Queen has also been planted in the herb garden at the front of the house.

The Sweet Potatoes are planted about two feet apart on a raised bed staggered on the bed. Once I’m able to get another bale of straw I will cover the whole bed with straw. This prevents the vines from rooting at every node (where the leaves join the stem). The objective is a central group of large tubers rather than pencil-thin tubers at every node.

Unlike regular potatoes where the tuber is planted in the garden, Sweet Potatoes are started by planting either shoots (called slips) or vine cuttings in the garden. Slips can be purchased by mail order (one Canadian source is Mapple Farms) or can be grown by placing tubers in water or moist peat moss 4 to 6 weeks before slips are required for the garden. The key to successful growing of Sweet Potatoes in Ottawa is choosing a variety that will produce a good crop during Ottawa’s short summers. DO NOT try to grow slips from a tuber purchased from a supermarket. The varieties found there generally require 120 days to produce a crop compared to the 90 or so days of hot weather available to the Ottawa gardener. Georgia Jet is by far the best variety that I have found for the Ottawa climate, having excellent taste and producing many large sized tubers.

Finally the beans that were planted May 19 (are you keeping your garden records up to date?) have broken through the soil.

In order to clear a bed for planting I harvested a couple of dozen leeks that overwintered very successfully. They were gratefully received by a local group home.

The Augusta Park Community Gardens have taken a step forward this week with the delivery of a truckload of top-soil and the laying-out of 8 raised growing beds – four which are 4 feet by 8 feet and four which are 3 feet by 11 feet. If you are interested in getting involved please let us know. I will be acting as a facilitator/coordinator for the community garden. I will be away until June 7 so in the interim please let Jeff at Mills Community Support know that you’re interested. Jeff can be reached at jmills@themills.on.ca. 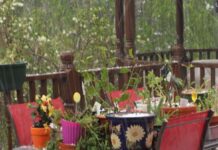 A hail of a time 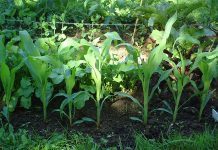 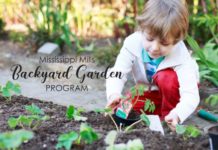 FOR SALE: Bench and tables