by Edith Cody-Rice If you are of...

Part 1: Green, but not so mean

As gardeners everywhere in Lanark County yank out yet another pesky weed from their lawn or walkway, they might be interested to know that many of them were unknown to the people who lived here before the European settlers arrived.

In this column, Part 1 of a two-part series, I will explain how some of the weeds we consider to be the bane of our existence as we strive for a decent-looking lawn, can provide some surprising benefits for us.

Take the dandelion (taraxacum officinale), so ubiquitous and so very persistent.  Originally of Asian origin, the dandelion was deliberately planted (!!!) in various regions in North America at different times by the Europeans (the Spanish brought it to New Mexico in the 1500s, the Germans to Pennsylvania in the 1850s, the English on the Mayflower to Cape Cod in the 1620s, and the French to Quebec City in the 1600s) who valued its medicinal and culinary properties.  Various parts of it were used in tonics, as a substitute for coffee, to settle the digestive tract, as a salad ingredient, as a diuretic (the French word for “dandelion” is “pissenlit”, which literally means “pee in bed”), and to stop infections and skin diseases.  More recently, people have come to appreciate that the dandelion’s early spring blooms provide much needed food for pollinators right after they emerge from hibernation.  And to top it all off, Tristin Hopper (National Post, 29 May 2011) reports that, “The flowers may even have industrial and health applications. In 2010, researchers at the University of Windsor announced that extracts from the dandelion root could be used to kill skin cancer cells. This week, the Ford Motor Company announced it would be using crushed dandelion roots to make synthetic rubber for auto parts.” 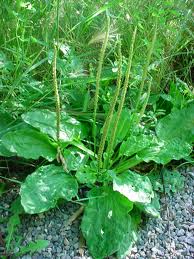 Plantain (plantago major), native to most of Europe and northern and central Asia, and reportedly brought (intentionally!!!) to North America by the Puritans for its medicinal properties, can be found wherever there is disturbed ground.  Like the dandelion, it’s considered an unwelcome lawn pest. The website Planet Botanic cites a book titled Macer Floridus, a compendium of medical information believed to be written in the 9th century A.D., which singles out this plant as “a cure for almost everything: dog bites and scorpion stings, black spots, boils, carbuncles, swellings of the lymph gland, epilepsy, excessive bleeding during menstruation, uterine pains, headaches, coughs, fevers, flu, and sore feet. It is also good for the eyes, gums, and bladder. The list goes on, and on, and on.” The same webpage explains that the Pennsylvania Dutch used plantain to soothe tired and abused feet, treat insect bites, lessen the pain associated with hemorrhoids, and get rid of intestinal worms.  It has also been found to be helpful for treating urinary tract infections, high blood pressure, stomach ulcers, and diarrhea.

According to Wikipedia, “the ability of plantain to survive frequent trampling and colonize compacted soils makes it important for soil rehabilitation. Its roots break up hardpan surfaces, while simultaneously holding together the soil to prevent erosion… Plantain is one of the favorite foods of the eastern box turtle, and is used as food by many other herbivores.” The leaves can be eaten in salads when young and tender, and when old and tough, they can be cooked in stews.

Creeping Charlie (glechoma hederacea), a member of the mint family, is a low-growing, aromatic creeping ground cover. To call it hardy is an understatement – despite my husband’s unstinting efforts, it has taken over our lawn and is here to stay. This plant, too, was intentionally (!!!) brought to this country by many different European settlers because of its medicinal properties. It has been valued for its health benefits for over 5,000 years.  Apparently it prevents scurvy because it’s extremely high in vitamin C, can be used as a diuretic, astringent, a cure for tuberculosis, a gastro-stimulant, a cough and headache remedy, a cure for pulmonary and kidney complaints, and a poultice for bruising and black eyes. Early Saxons used creeping Charlie to clarify beer, before hops were used.

Although we can find these non-native plants in almost every lawn in the county, they aren’t considered a threat because they grow on disturbed ground only, and don’t infest woodlands, wetlands and waterways, or compete with other native plants – mainly just our grass and roadsides. Other weeds brought over by Europeans for their medicinal or culinary benefits, but not considered a threat, are: curly dock (rumex crispus), common purslane (portulaca oleracea), chickweed (stellaria media), chicory (cichorium intybus), catnip (nepeta cataria), motherwort (leonurus cardiac), Queen Ann’s lace (daucus carola), red clover (trifolium pretense), and common mullein (verbascum thapsus).  Because of limited space, I’ll leave it up to you to find out the benefits of these plants.

Having tried all kinds of non-chemical techniques to eradicate these weeds from our vast lawn without success, perhaps my husband and I can see them as our allies, and a means to eliminate our medical and pharmaceutical expenses.  No more trips to the doctor for bloating, black eyes, scurvy, tuberculosis, unsettled stomach, headaches, boils, dog bites, skin cancer, epilepsy, scorpion stings, insect bites, hemorrhoids, infections, loss of appetite, stomach ulcers, heartburn, diarrhea, high blood pressure, urinary tract infections, fevers and flu. No siree!  We’ve got all the remedies we need growing, free for the picking, in our yard!

Civitan 50-50 in support of Puppets Up

Gardening in Almonte: A critical path

Leaf Project – thank you, everyone