Home Living Health No Matter What: Parkinson’s SuperWalk a success

Last Saturday, September 12th, there was no stopping Lou McCann, a member of the Parkinson’s Boxing Group in Smiths Falls. COVID-19 necessitated a major change in the annual Parkinson Canada SuperWalk which takes place each September to raise funds for and awareness of Parkinson’s Disease, the fastest growing neurological disease in the world. McCann was determined not to let the day go by without being with his “Parkinson’s family”, the boxers he and everyone else in the group considers an integral part of their lives. 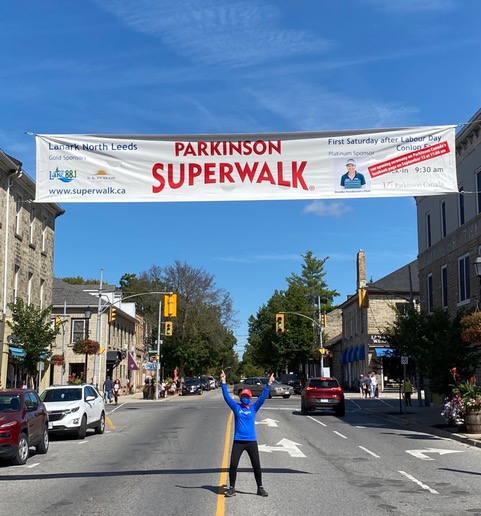 This year, across the country, people were encouraged to walk “in their own way” with family and friends in their close circle. Lou decided to organize a relay walk from Perth to Smiths Falls with participants, walking with their “bubble” for a section of the distance. Six hours later, Mayor Shawn Pankow met up with one of the walkers, Bob Arnold, Brooke Henderson’s Great Uncle to finish the last leg of the relay to Centennial Park. There, he spoke to the participants, recognizing the importance of a supportive community and encouraging others to become involved. “ This was certainly different than the past three years but just as successful,” said Pankow. You are all an inspiration. I will see you at next year’s walk. No Matter What.”

The Parkinson SuperWalk has been taking place for 30 years across Canada. In this area, in the four years since the walk began in 2017, (and including this year’s walk) more than $200,000 has been raised. Since the number of people with Parkinson’s Disease is expected to rise quite dramatically over the next decade, it is welcome news that the community continues to be so supportive. Rob and Deborah Campbell of Campbell’s Trucking are an example of the generosity of spirit in Lanark. With a sponsorship as well as donations collected, they have raised $3500.

“Relative to the size of the population and the impact of COVID,” says Pat Evans, a local advocate who has Parkinson’s, “the amount of money we have raised is incredible. I continue to believe that it is because so many in this area have been touched by Parkinson’s. And unfortunately, with a high percentage being older than 50, the number is sure to grow. The support we receive from the community provides the means to continue to address service gaps and ultimately find a cure.”

Although general donations are accepted year-round, donations to the local walk in Lanark North Leeds must be made before September 30. Visit donate.parkinson.ca/lanark or call 1(800) 565-3000 ext. 3427.

Children’s fall programs at the Library