Home Science & Nature What is That? What is that … Skimmer?

A large number of the dragonflies we see at White Lake belong to the skimmer family … a family that likes to be near water, whether marshes or ponds or slow streams.  They spend much of their short adult lives perched on a twig or branch, darting out to capture unsuspecting mosquitoes or flies for supper, or looking for mates.  Most importantly, they predate mosquitoes!

All dragonflies including skimmers pass through the same life cycle … adults feed on flying insects and mate; females deposit eggs in the water; and, eggs develop into nymphs that live and feed in the water, overwinter, and emerge during summer as adults.

After mating, the female skimmer deposits her eggs near plants emerging from the water’s edge.  The eggs develop into nymphs which feed on other insect larvae, tiny tadpoles and even small fish before climbing out of the water onto a bush or plant, or even the edge of our dock to moult their skins and become adults.  The first photo below is of a day-old nymph case attached to the side of our dock.  The dragonfly is long gone.  The second photo is of a very recently emerged adult, resting beside its nymph case.  The rest time allows blood to be pumped into the wings to firm them up so the dragonfly can fly.  The very young adult rests for a short while as a teneral before heading off to start capturing mosquitoes. 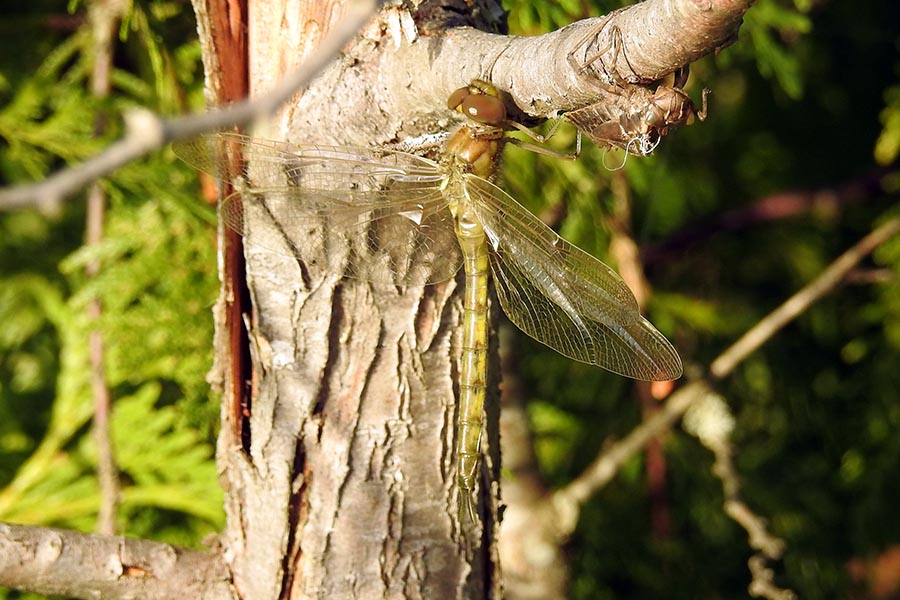 We saw a new skimmer in July 2020 … a slaty skimmer.  The photo below could be of either a mature male or female, since both sexes develop an almost black body, as well as a dark face and blackish eyes.  It may be fair to say the slaty skimmer is uncommon in Lanark as our Algonquin field guide says it is uncommon there.  At the very least it was previously unknown to us at the cottage. 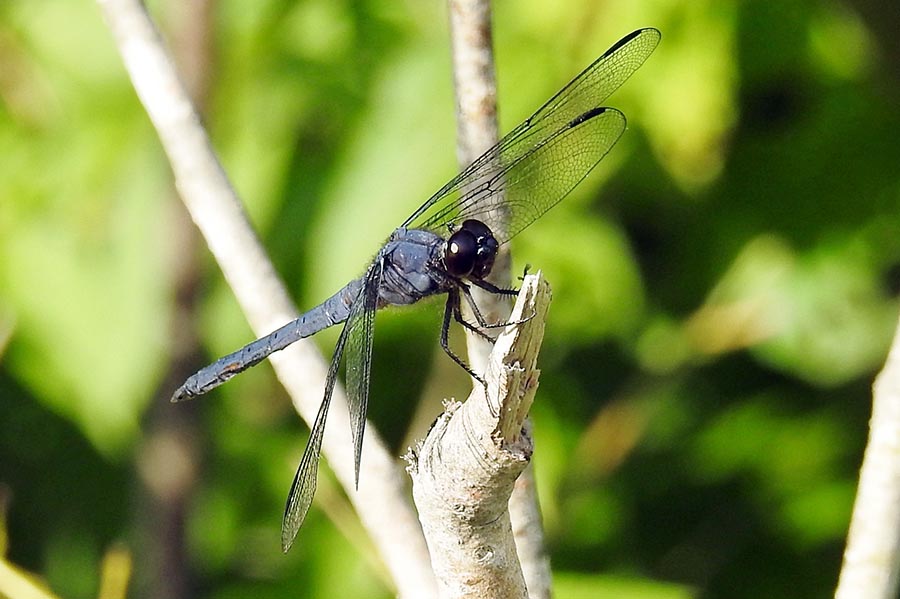 The mature male eastern pondhawk (skimmer) is somewhat similar to the slaty, but the pondhawk is a paler powder-blue and sports a green face.  We love to see the eastern pondhawk dragonfly and we do, every year around the lake.  It is a voracious predator taking out larger insects, up to and including other dragonflies.  We hope this voracity includes deer flies.  The first eastern pondhawk photograph below is of a male.  The second photo is the adult female.

The widow skimmer dragonfly is one of our favourites partly because it is so easily identified, and partly because it eats mosquitoes.  The wing pattern of the mature male is unique with large dark patches at the base of it wings and contrasting white patches, which can also be seen easily, at the outside edge of the dark patches.  The female’s wing patches are not as dark as the male and lack the white.  The first photograph below is of a male.  The second is the female.

One of the first dragonflies we learned to identify was the chalk-fronted corporal which also belongs to the skimmer family.  Their name derives from the two, parallel, white stripes easily seen on the topside of the thorax.  The male’s ‘corporal’ stripes can be strikingly white, while the female’s are paler, so it took us longer to learn to identify her.  The mature male also develops a white pruinosity on the segments of the abdomen closest to the thorax. 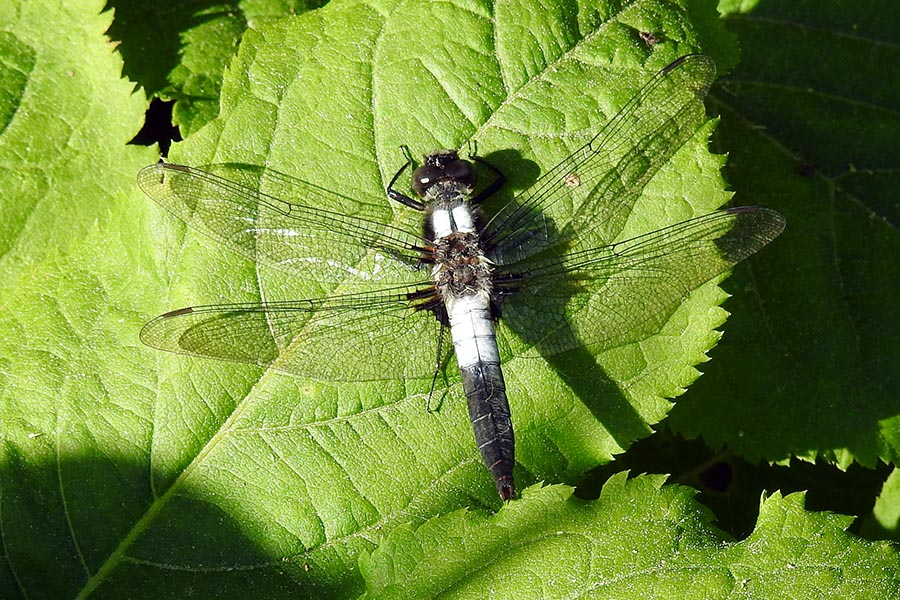 We see several other species of skimmer at the cottage throughout the summer, but we will save them for another day.  Most of the photos in this article were taken in 2020.  The nymph case and the teneral were taken in June of 2017.

What Is That … Snake? 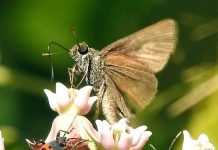 What Is That … on the Pale Purple Petal?

What is That … Gypsy Moth Predator?