Earlier this summer we listened to a program on LAKE 88.1 describing the efforts of the Mississippi Madawaska Land Trust (MMLT) and its good members to protect wilderness lands in Lanark County.  Specifically that morning, Dr. Paul Keddy was scheduled to talk about the Salamander Forest which he and his wife, Cathy Keddy, had recently donated to the MMLT.  At the last minute, Dr. Keddy was not able to lead the discussion, and was replaced by Michael Runtz, a man who needs no introduction to lovers of nature in Lanark.  Amongst other things, Professor Runtz spoke about endangered species in the region.

We have photographed five endangered species, as listed by the Ontario Ministry of Natural Resources, that are found in the White Lake area.  We have written about each of these five in various “What is That …” articles over the years, but Professor Runtz’ presentation prompted us to think it could be interesting and useful to gather together the five species in one article.

The federal Species At Risk Act defines several categories of risk two of which we will mention in this article.  Firstly, species of Special Concern are those which may become threatened as a result of a variety of factors.  Four species in Lanark fall into this category: bald eagle; monarch butterfly; snapping turtle; and, eastern ribbonsnake.  Secondly, the Blandings’ turtle is considered to be a Threatened species.

It was such a delight to see a few years ago, that once again bald eagles are nesting successfully on White Lake.  Once severely endangered, the bald eagle has made an impressive recovery after the use of DDT was banned.  In 2021, two pairs of bald eagles have hatched young at White Lake.  One nest we saw from a distance held two nestlings. The adults are fishing throughout the area this summer and have posed for our intrepid photographer several times. 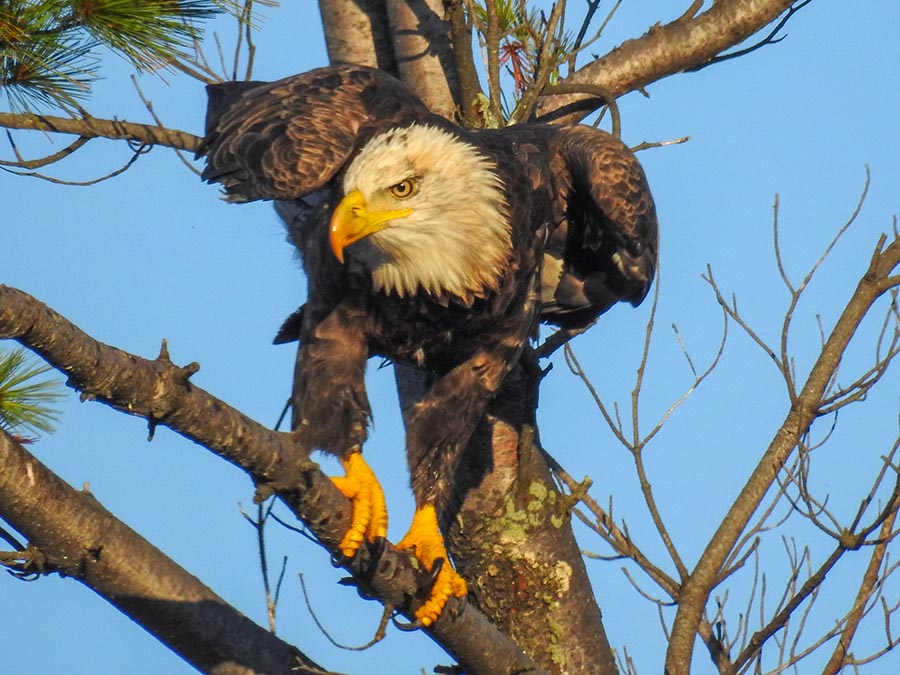 We have also seen and photographed monarch butterflies and their caterpillars this year, and have seen an encouraging increase in numbers in recent years.  It would seem the efforts of citizens throughout Lanark, and beyond, to plant and maintain the milkweed plant are paying off.  The monarch, however, faces great challenges during its autumn migration to its winter destination in Mexico.  We recently shared a photo of a monarch with you, so below is a very recent photo of its chrysalis moments before the butterfly emerged.  We learned only recently that the chrysalis turns a dark colour to announce this imminent stage. 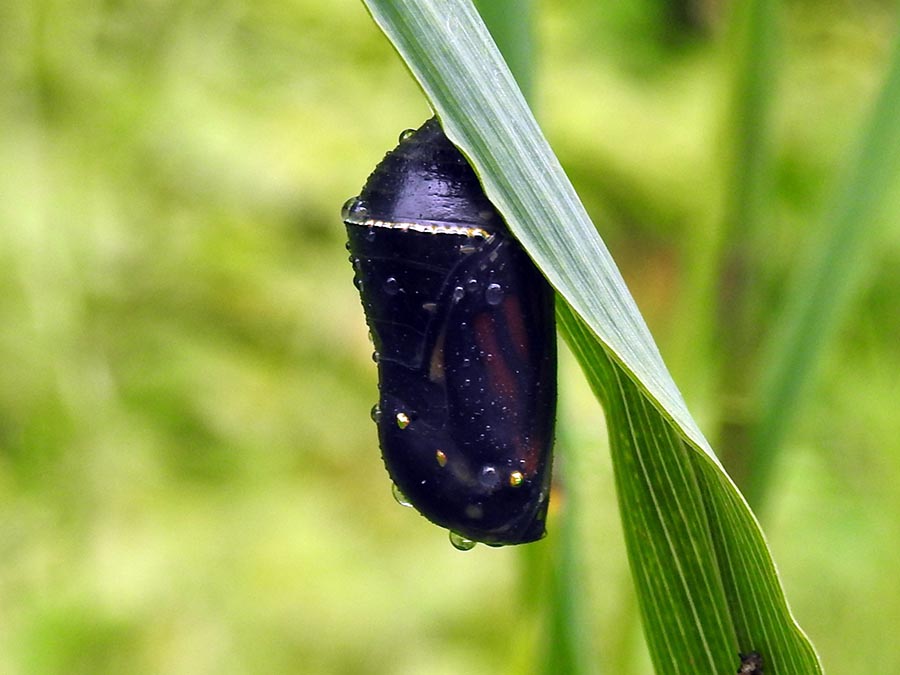 The eastern ribbonsnake resembles the common garter snake to which it is closely related, but our ROM field guide tells us it is more slender.  Despite this description we find it extremely difficult to differentiate the two species.  We have been assured, however, that the photo below is of a ribbonsnake.  It is not at all common in our area, and we are delighted to share this photo with you. 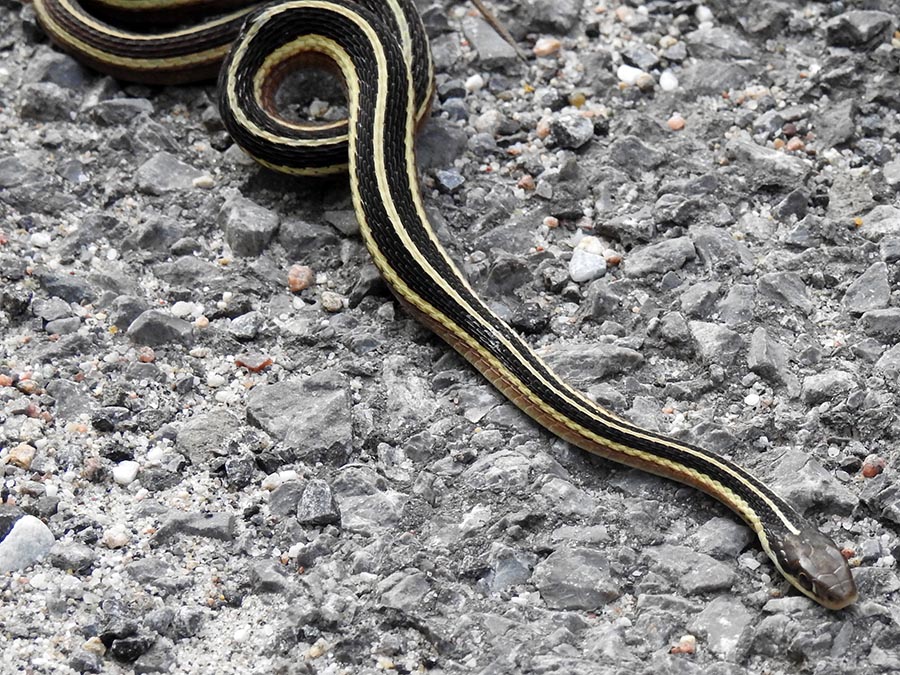 The snapping turtle seems to be common in and around White Lake, but the MNR lists it as a species of Special Concern because it is at risk at a macro-level in Ontario.  Every spring for years we have watched females dig their nests at the road side to lay dozens of eggs.  Every spring too we have seen the remains of these nests after they were predated upon, likely by raccoons and foxes.  Each year, though, a few eggs hatch and a few times we have watched as hatchlings struggle towards the water.  This female snapping turtle has made quite a mess of herself in the passion of her nest digging.

Fifth and perhaps most critical at this time is the Blanding’s turtle which is categorized as a ‘Threatened’ species, which is a label for animals which are likely to become endangered if nothing is done to intervene.  We have seen and photographed the Blanding’s turtle only twice during the past few years, and were thrilled each time to see its distinctive helmet-shaped carapace.  Work is being done locally through the installation of road side fences, and inventories of the turtle.  We hope these efforts are successful.  We have not seen a Blanding’s Turtle since the following photo was taken in 2017. 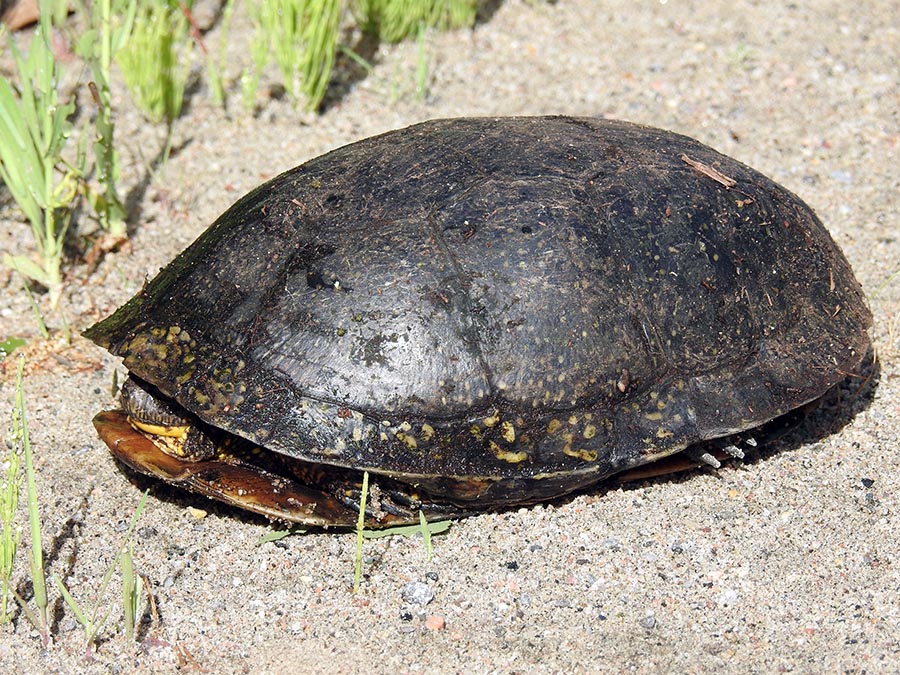 When it comes to species at risk (which also includes flora), we can all do our part by becoming more aware of our natural environment.  With regards to ‘at risk’ fauna we can support the efforts of our neighbours to plant and nurture milkweed plants; and, we can drive cautiously on our county roads to avoid striking animals.

A catalyst to the writing of this article was Dr. Paul Keddy’s 2021 edition of A Guide to the Natural Environment of Lanark County, available at Mill Street Books in Almonte.  We also consulted the MNR’s website concerning species at risk, as well as the ROM Field Guide to Amphibians and Reptiles of Ontario by Ross MacCulloch.

Hospice teams up with paramedics on palliative care

‘Hike for Hospice’ coming up in October

FOR SALE: Canon 60D with lens