One of the joys of spring is being present at the cottage for the emergence of the first dragonflies … the dragons of spring.  It varies from year to year, but this year during the second half of May clouds of 1000s of tiny midges appeared, joining the black flies and mosquitoes.  This would have been awful if it were not for the squadrons of dragonflies that quickly appear for the feast of their short lives.  The amazing sight of 100s of dragons soaring, dipping, changing direction rapidly to nab an in-flight meal is surely one to behold. Occasionally, a dragonfly exits the frantic activity over the open area between the deck and the lakeshore to light on one of our shoulders and chomp through its meal. Despite our love of dragonflies, the crunching of an insect by a dragon so close to one’s ear can be disconcerting.

Our intrepid photographer has managed to capture four species of early spring dragonflies participating in this aerial assault of the midges: chalk-fronted corporals; common baskettails; beaverpond baskettails; and, American emeralds.

Perhaps the most common and certainly easiest to identify (for us) is the chalk-fronted corporal dragonfly.  The mature male has a dark abdomen, whitish in the four segments closest to the thorax.  Most distinctive and the field mark that always jumps out for us is the two, almost bright white bars on the top side of the thorax, reminiscent of a corporal’s stripes.  Female and juvenile male corporal stripes are pale and less clear, and that is what you see below. 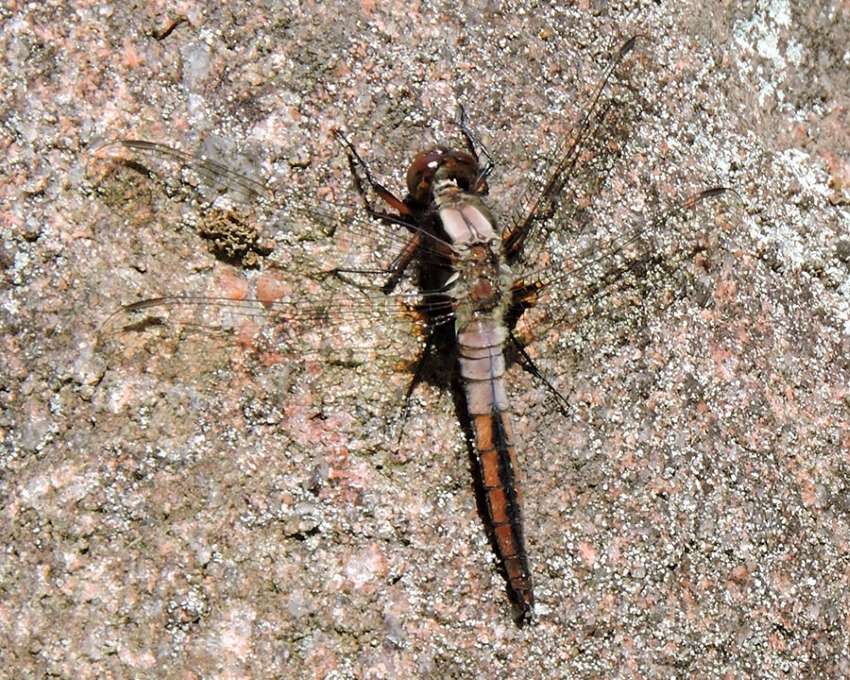 The preceding four dragonflies seem to prefer similar breeding areas.  It is not surprising to read that beaverpond baskettails breed and lay their eggs around the marshes created by beaver, but the common baskettail’s preferences are similar.  The American emerald and chalk-fronted corporal also breed in marshy areas.

We are thrilled to be able to tell you about a new-to-us dragonfly captured (by camera) at the roadside this year.  While it probably ate some midges, it was not part of the squadron attacking the cloud with the previous four species described above.  A beautiful, much larger dragonfly, the horned clubtail is more apt to hunt its prey by launching from a lilypad or rock.  The roadside seemed to serve the purpose for this individual.  One of the distinctive features of the horned clubtail is the yellow occiput which is the area at the top of the head between the eyes.  Horned clubtails are said to prefer the marshy edges of lakes for breeding.

The hordes of midges have died off or been eaten by our beautiful dragons of spring.  Now, we are hoping for great numbers of four-spotted skimmers and Hudsonian whiteface dragonflies to join the American emeralds as they continue to take on the mosquitoes and black flies, as well as the deer flies, of late spring and early summer.  Go Dragons Go!

101-year-old hikes to support the Hospice