Home Columnists By The Way with Bill Chapman Summer holidays

How common is it to be asked, "So, are you taking any holidays this summer?" My invariable reply to this stereotypical enquiry is that "We just take short weekend jaunts". The fact of the matter is that, as a sole proprietor, at any time of the year – summer, fall or winter – any holiday I may be lucky enough to take is likely qualified as a short jaunt. It is a casualty of running one’s own business that even temporary absences are the equivalent of strangling the baby. Such an observation may, to the casual observer, inspire immediate reproval as poor planning; however, the highly individual nature of a sole proprietorship predicts that the removal of its constituent element effectively disengages the business. Balancing this innate trepidation is the equally common adage that everyone needs a break. In my initial years of practice, however, my paranoia about abandoning the office was so sizeable as to inhibit me going anywhere except on long weekends when I knew that business was already shut down. I have of course since learned that the universe is perfectly capable of bearing the deprivation of my company for at least one week; and, if properly scheduled, for even as much as three weeks (say over the already "quiet" Christmas period) though anything longer usually entails no end of orchestration of assistance from neighbours and friends to check the mail, check the house, sweep the snow, etc.

In the minds of some, holidays are not only replenishing but also a matter of entitlement. This claim is not one that everyone assumes. For example I have heard of shopkeepers (often "mom and pop" businesses) who hadn’t taken a day’s vacation during their entire career. Very often this is a distinction reserved for immigrants to Canada, people who frequently distinguish themselves by perpetual labour as though it were that condemnation to which they, but not others, are "entitled". By no small coincidence those same relentless labourers commonly end by creating for themselves a comfortable retirement. As Phyllis Diller once said, "The harder I work, the luckier I get!" an intersection sometimes lost upon the indigenous population.

I have also discovered in my reading of eighteenth and early-nineteenth century British novels that the right to the benefit of travel was most certainly not shared by any other than the aristocracy. It is no accident that in times of economic downturn one of the first privileges to be put adrift is that of travel. We Canadians in particular know the cost of travel, having for so many years paid a premium on the conversion of our dollar to the worldwide standard of US funds.

We Canadians also know the worth of travel. Cost is sometimes merely the acceptable penalty for getting what one wants. To employ another quip I recall, "There are two ways to travel: first class and with kids!" This thesis I have found had particular attraction to people who were once labeled "yuppies" (Young Urban Professionals), people who were customarily A-type personalities obsessed with their work but who because of reaping such lucrative compensation were able to throw endless amounts of money at anything they wanted. Even if cost were a consideration, there were ways around the subject without having to dilute one’s expectations. Florida in the summer is for example the best kept secret. Being "off season" one is able to fly there and back economically, enjoy perfectly pleasant weather with a constant breeze off the Ocean, stay in the best hotels at reduced rates and never have trouble getting a luncheon or dinner reservation at the finest restaurants. This sort of intense holiday, while it may not appeal to the family who prefers a rustic cottage, certainly coincides with the focused determination of others, especially those who are so manifestly dependent upon production as a source of personal approbation that they find it impossible to be apart from it for longer than a very short period.

I regret to say that this accommodating rationalization of the business of holidays is likely no more than a mere disguise of my eternal embarrassment that I may never enjoy the day when I can just jump into the car and buzz off. On the other hand I am the first to admit that one cannot have everything. Once again life is reduced to compromise, the unforgiving concept that it is! 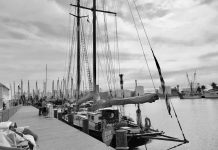