You are cordially invited to our OPEN...

Create your own pollinator garden with our...

Another scam attempt? Another unsolicited knock at...
NewsAppleton Park fence comes down with the help of Councillor Shaun McLaughlin 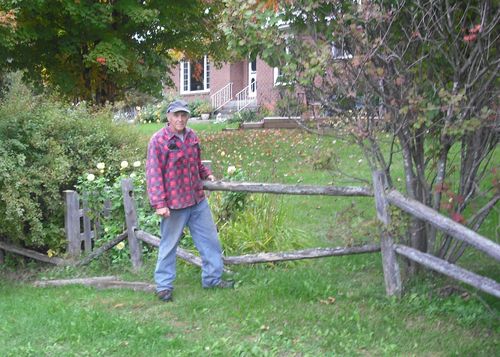 Last year Mississippi Mills Councillor Shaun McLaughlin received a complaint about a rickety rail fence in Appleton Park and the derelict outhouse there. The MM recreation co-ordinator, Calvin Murphy, added an item to the 2012 budget to remove the outhouse and replace the fence. That item was cut by Council during budget deliberations.

This year, the complaints about the park continued. The roads department did Calvin a favour and removed the old outhouse. Through e-mail conversation with the three homeowners bordering the park, Shaun got a consensus to remove the fence instead of replacing it. The fence was largely cosmetic and would have cost $7000 to replace.

To expedite removal, Shaun  told Calvin he would  remove it himself if Calvin  would supply a truck. In the end, two trucks and three men showed up this morning at 8:30 a.m.. They had the fence removed and loaded on the trucks within 40 minutes. Letter from Germany Part 3 – The problem of unaccompanied underage refugees

‘It’s a Walk in the Park’ Community Musical Fundraiser a Success!