This delicious recipe from the New York Times takes advantage of in-season corn and tomatoes. Sear the shrimp and cook the bacon until it’s crisp (I actually cooked the bacon first and then seared the shrimp in the bacon fat). Cook corn niblets and scallions and then add cold, cooked rice. Press the rice into the pan and let it cook until a brown crust forms. Top the crispy rice with the shrimp, tomatoes and bacon and serve.

Look for frozen organic shrimp with only salt added (fresh shrimp is often treated with sulphites to remain white). Use bacon preserved with celery salt. For more recipes using all-natural ingredients, visit Eye For a Recipe.

Heat oil in large cast-iron skillet or other heavy skillet over high heat. Season shrimp with salt and pepper. Add to the hot oil in a single layer and sear until browned, 1 to 2 minutes per side. Transfer to a plate.

Turn heat down to medium-low and add the bacon in a single layer. Cook, turning to evenly brown, until crisp, about 10 minutes.

While the bacon browns, shuck the corn and cut off the kernels. You should end up with about 3 ½ cups (875 ml). Thinly slice the scallions and set aside some greens for garnish. Cut the tomatoes in half. (If the bacon is done cooking before you’re finished slicing, remove the pan from the heat for a moment.)

Drain the bacon on paper towels, leaving as much liquid as possible in the skillet. Turn the heat up to medium-high and add the corn, scallions, and a pinch of salt to the skillet. Cook, stirring, until the scallions just wilt, about 1 minute.

Add the rice and stir until well-mixed and heated through, about 3 minutes. Press the rice evenly across the bottom and up the sides of the pan. Let cook, without stirring, as the rice and corn begin to crackle, until you smell a toasty scent and the rice browns, about 5 minutes. You can lift up a section of rice to peek and see if a golden-brown crust has developed.

Remove from the heat and divide the rice mixture among four bowls, scattering the tomatoes, shrimp and accumulated juices on top of each. (Alternatively, serve rice directly from the pan, with tomatoes and shrimp on top.) Season to taste with salt and pepper. Crumble the bacon all over and garnish with the reserved scallions. Serves 4.

From the New York Times 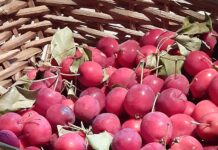 A harvest of crabby delight