Clearly, most of our local politicians are outrageously out of touch, and our upcoming municipal election is an opportunity for citizens to make them  understand they serve the people and not big business interests from outside our community. The looming Enderdu fiasco has seen nearly all downtown Almonte merchants participate in a photo-slam protest. On Facebook, check out this link.

Initiated by Almonte photographer Shawn DeSalvo of DeSa Photography and Musical Artist and Teacher Kathryn Briggs, this protest by my fellow entrepreneurs (and many other concerned residents, including kids who love playing in the river instead of staring at a butt-ugly cement behemoth with “NO SWIMMING” barriers) who pay not one but two sets of municipal taxes (commercial and residential) slams the utterly irresponsible “Oh gee, it’s not us, it’s Queen’s Park” line of reasoning that permeates our soon to be erstwhile Town Council.
Also check out the courageous, articulate and original “naked truth” video by Alliance Coin & Banknote Owner Sean Isaacs – a downtown entrepreneur who previously stayed out of the political fray, but who has had enough of this commerce-destroying nonsense over what he says is a project that “benefits none of us but one of us” and promises to be “an aesthetic blight” on our Town.
If we had a Mayor with any leadership skills, he’d be lobbying the Ontario Government at Queen’s Park at every opportunity, with or without the support of his spineless Council. And if we didn’t have a spineless council, most of them would have by now made repeated trips to Toronto to meet with and educate the relevant ministers who can and will react to the will of the people with or without the support of the Mayor. Because responsible and responsive politicians DO understand that they represent the will of the people and don’t attempt to sell us down the river while pretending they’re doing their jobs.
To any local politician who is on the wrong side of this issue in the upcoming election, you are DONE. TOAST. FINITO. Wake up and smell the river. Get behind the people. Do your job. 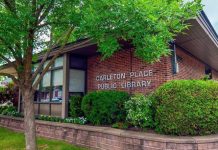 Want to help pull a rabbit out of a hat? Or a Puppets Up...

33 new COVID cases in our part of Lanark County