How to refer to objects in the sky? Over the course of a month, the same constellation (and the stars, clusters, and galaxies within those bounds) will rise 2 hours earlier by the end of the month.

Need a way to refer to an object’s location

Alt-Az coordinates of celestial objects will change with time and location. Celestial Coordinates are used for locating stars on a fixed map.

Objects on the Celestial Sphere (– since last week have shifted to the West…Last week our planisphere showed constellation Leo just West of the Meridian, our
North-South line on which the stars culminate (reach highest elevation) when they are due South.

Now notice where Leo is…. It is starting to set in the West

Recall: What we see in the sky depends on

Locating what  constellations are visible  depends on the section of sky bounded by lines of Right Ascension are near our local Meridian for a given time of year. As we orbit the sun, we see different sections of sky, different constellations when the sun is below the horizon. At midnight in the fall for example our night sky pointer, points away from the Sun into deep space in the constellation of Andromeda.

For a really complete guide to Right Ascension and Declination – visit our Calgary RASC  site: http://calgary.rasc.ca/radecl.htm

Locating What Stars we see based on Sidereal or Star Time

Sidereal Time = Hour and Day with respect to the Stars..(not the Sun)

This is called a Sidereal Day. It measures both Earth Rotation and Orbit with
respect to the stars

The stars rise 4 minutes earlier each day because the earth has also moved through its orbit as it has rotated around from night to day to night. So now we see why Leo will rise 2 hours earlier at the end of the month: 4 mins x 30 days = 120 minutes or 2 hours.

Leo is an early Spring constellation and will rise and set earlier each night . In later spring, these stars will eventually set while it is still daylight.Constellation Leo will be followed by the summer constellation of Lyra (which contains the bright star Vega).

Celestial Objects rise in the East and set in the West

Apparent Motion of the Sky

Every night, stars rise and set… just as every day, the Sun, our star rises and sets… Because the Earth is turning and carrying the observer from West to East, the stars seem to be moving from East to West. What we see in the sky changes all the time because the earth is always rotating.
The Sun in the morning appears to rise in the East, At noon, it appears in the South (for our latitude) part of the sky. In the evening it is seen setting in the West.

Star Positions throughout the Evening for a given Latitude

If you are not using the adjustable planisphere or a planetarium program, and just want to observe with star maps, you will need to use more than one over the course of the evening . Leo Enright has provided 6 star maps in The Beginning Observer’s Guide that show the sky for two months as a time. The one  above is  Map 3

For more detailed star maps, use maps that show details of areas according to Right Ascension . One example is the Pocket Sky Atlas: 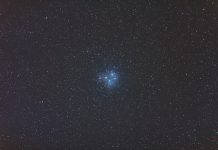 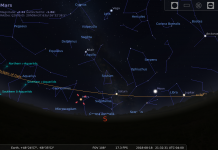 August 2018 Mars Bright and Large but Low in the Sky 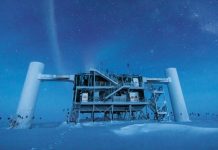