Despite the rain and cold, there was a warm and welcoming turnout at last night’s concert by the Ottawa Summer Strings Orchestra in the Old Town Hall.  Many people  commented on how much they liked the unusual seating arrangement in the Ron Caron Auditorium which allowed them to sit so close to the musicians and their conductor.  “I could actually feel the sound vibrations from the viola I was sitting next to”, said one.

The program was a rich and satisfying mix of Handel, Bach, Elgar, Mendelssohn and Demmon.  “Demmon?” I hear you ask.  Randy Demmon is the orchestra’s lead Double Bass player and a fine composer and arranger.   His “Summer Songs 2015” arrangement based on existing summer-themed contemporary tunes was a jazzy, lighthearted piece that ended the first half before intermission.  Randy is one of the founders of the Ottawa Summer Strings Orchestra and a great friend to Almonte.

This is the second year that the orchestra has performed a concert in Almonte in collaboration with the Mississippi Mills Cultural Advisory Committee.  The orchestra enjoys performing here as well as working with the local arts community.   In fact, they very generously shared the ticket sales with the Cultural Advisory Committee to contribute towards the funding of cultural events in our community.

We hope to see the Ottawa Summer Strings Orchestra back in Almonte next summer. 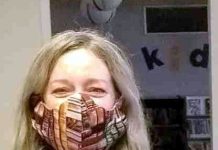