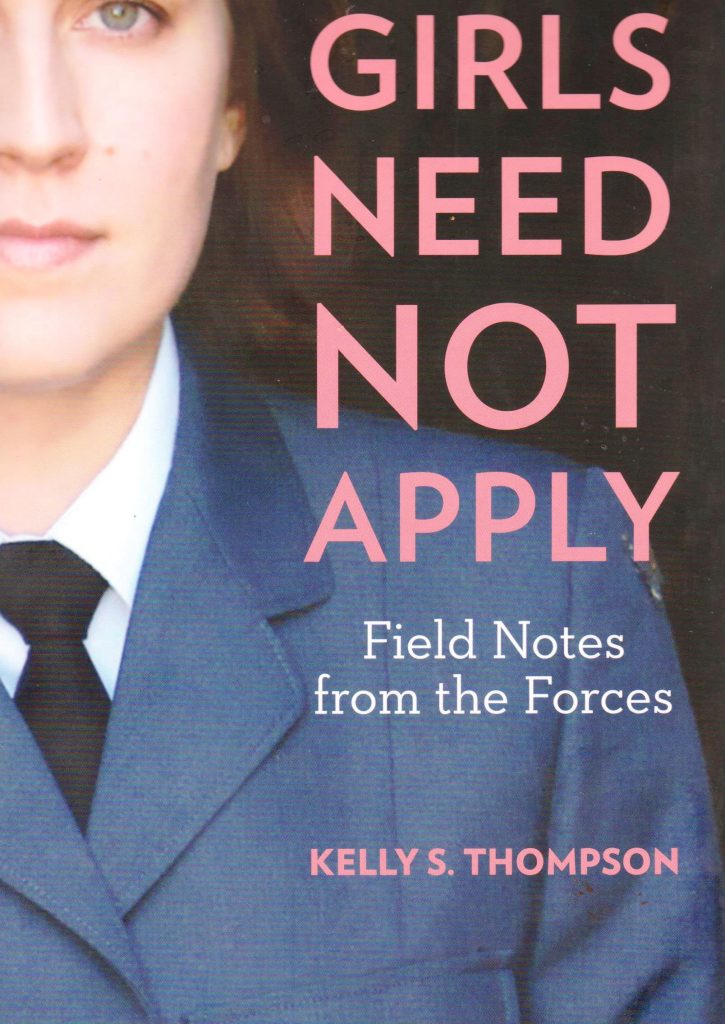 I ordered this book out of a sense of duty. It is a memoir of a woman who spent 8 years in the Canadian Forces. Yawn, I thought, but I should read it.

Wow, was I wrong. This woman can write!! It is a very good book, articulate and witty  and is written with all the attention to detail and imagination of a novel. I can say that I enjoyed it thoroughly.

Kelly S. Thompson is a sel described army brat, having grown up on Canadian Forces bases. When she entered the military at age 18, she was the 4th generation of her family to take up this career path. Her father and grandfather had been career officers.

The memoir is both an insight into military life – basic training and officer training, and an indictment of the military’s attitude to and treatment of women. As she said in an interview on November 11 this year with TVO’s Steve Paikin, Ms. Thompson is very glad she went into the military, has no regrets and had some very good moments, but she also endured all the patronization and disdain of her male colleagues. As she points out, what the military appreciates is physical strength and endurance, not her strong points, and what they consider less important are the softer skills such as empathy and compassion and true leadership skills at  which she excels. Her commander, conditioned by her relative physical weakness,  was dumbfounded when she scored at the top of  her class in leadership tests.

The military was still, at the time Ms. Thompson left the forces in 2011, into victim blaming in cases of sexual assault, but here is the difference — the millennial women they are training see right  through it and don’t buy it, but, by and large, let it pass. They don’t complain while serving because the blowback can be punishing. Their treatment affects their respect for their commanders though.

Ms. Thompson explains the overwhelming impression of being an outsider, rarely included in the hyper masculine world of the military. It was, overall, a lonely life.  Although she is smart and accomplished, when appreciated, it was more likely for her physical attributes, a situation not unknown to young women everywhere, but over the top in the testosterone fueled military.

Ms. Thompson doesn’t spare herself though. She owns up to her mistakes – at 18 and 19 she was naively flirty with male colleagues in an attempt to be accepted as a young officer cadet. Then she had an affair with a married man of higher rank in her unit. Yikes – talk about a career limiting move!! As she told Steve Paikin, she owns her garbage. She was young, however, in her early twenties. Still…..

It must be said that the training is grueling, not for the faint of heart. And brutal. Ms.  Thompson broke her leg in training but it was misdiagnosed in the field as tendonitis and she was forced to march 30 kilometers on it. Her superior officers, with the exception of one woman, were harsh and unsympathetic, even when it became obvious that there was a serious injury here. As a result, when the fracture was finally diagnosed it refused to heal properly and ended her military life when she was medically discharged several years later.

The training provided by the military is the insight into that life. It is thorough, structured and very disciplined and many soldiers are attached to that life of principles and rules and are devastated when they have to leave it through retirement or discharge. It is a family in many ways with solidarity at its core, which makes it difficult to break ranks to call out misogynist treatment.

There is also a disturbing side serving of PTSD in the book. Ms. Thompson’s father and grandfather both suffered untreated PTSD and her father was medically discharged from the army because of it.  His treatment during a long career was wholly inadequate. The result was dispiriting and spiritually calamitous for him and very difficult for his family.  As he said, when he spent a stretch in CAMH, the Toronto Centre for Addition and Mental Health, civilian doctors just don’t understand. Then, I asked myself, why was he being treated by civilian doctors? I can well believe that they can’t understand what truly happens in a theatre of war nor its devastating effect on the psyche.

Far from being a static tale relating event after event, this is a dynamic and absorbing book. I read it in two sittings and late into the night. This is a debut book for Kelly S. Thompson and I am looking forward to her next.

A footnote: Ms. Thompson told Steve Paikin that the title is “tongue in cheek”, but I would advise any young woman considering the military to read it seriously. That said, Ms. Thompson said she is now being invited onto military bases to advise on changes that should be made. That is progress – and, oh yes — she met the love of her life and her husband in basic training. I guess it can’t be all bad.

Published by McClelland and Stewart

Off the Record by Peter Mansbridge

Civitan 50-50 in support of Puppets Up

What Is That … Beastie Eating?

The Millstone wishes all of our readers a very merry Christmas

What Is That … African Bird?

On cats and birds