On my way to visit the Cedar Hill school house last month, I pulled over on Lanark County Road 29 just a ways north of Snedden Road.  Many times I had admired this particular row of oaks growing along the east side of the highway.  With the cloud bank breaking up, and the sun emerging for an afternoon showing, it was the right time to put my signal on.

Roadside trees were once a common feature of the rural landscape.  During the mid and late 1800s, farmers planted native maples from their woodlots on property lines and along their lanes.  In 1871, the Government of Ontario passed an act to encourage the planting of trees on “highways”.  Under a cost sharing agreement with the province, municipalities were to pay landowners up to $0.25 each for trees planted along the roads.  Trees from this era, many of them native maples, still line some roads today.

In the meantime, progress and the march of time have taken their toll.  The surfacing and widening of roads for faster traffic, and the expansion of roadside ditches for drainage, has claimed many mature trees along our byways.  Others, once deprived of the sheltering effect of nearby trees when the roadside clearing was finished, were left exposed and succumbed to the harsh forces of weather.

The giant elms that grew along highways in our region are pretty much gone as well.  Many died from Dutch elm disease which was accidentally introduced to North America.  It’s caused by a fungus that’s carried by an elm bark beetle.  The large framed photos that used to hang in Almonte’s old town hall were a true testament to the majestic beauty of the elms that dominated our urban and rural landscape less that a generation ago.

So how did a row of substantial oak trees survive along the busy highway between Almonte and Pakenham?  When were they planted, who planted them, and why were they planted?  Although I don’t know their stories yet, I’m happy to introduce them this month. 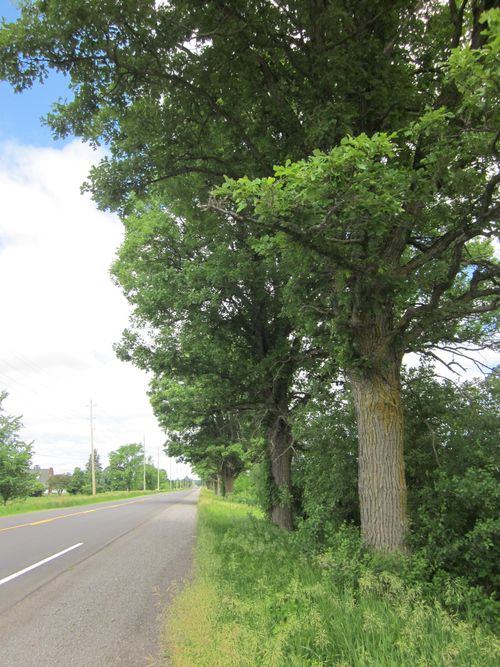 After safely pulling over well off the busy road, my first reflection on the oaks was what a kind deed it was for a person or persons unknown to plant a row of trees for future generations

Oaks are slow to grow and this fine row includes trees of various size.  The thirteen trees I measured range from 0.82 m (32.25 in) to 0.23 m (9 in) in diameter at chest height.  Four of them are over 0.60 m (23.5 in) across.  They’re young trees not anywhere near maturity yet.  I wondered too about the significant salt load around the base of their trunks from highway maintenance during the winter.

The leaves of bur oaks can range up to 20 cm (8 in) long. Look for a broad leaf end with rounded lobes.

Bur oaks are the most widely spread of native oak in Canada.  They’re distributed from southeastern Saskatchewan, southern Manitoba, Ontario, Quebec, and east to New Brunswick.

The gray-brown bark of the County Road 29 row of oaks is deeply furrowed with ridges broken into irregular thick scales. Bur oaks are considered to be fire resistant due to the thickness of the bark. 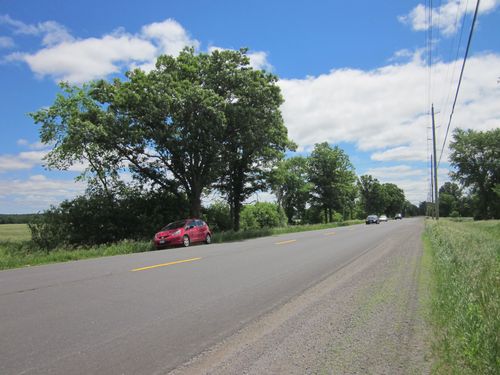 Should you stop to admire these shady characters, be especially alert to fast moving traffic. It’s a very busy road.

To see an interactive view of this oak row, visit google maps at http://maps.google.ca/.  Type in 4142 Lanark County Road 29, then click on ‘enter’.  Along with a map, showing the road location, is a unique ‘street’ view.  Double click on the photo to enlarge the image.  To look up or down the road, click on the arrows in the top left corner.  To zoom in for a closer look at the oak row, click on the plus symbol.  Way cool!

I’d be grateful to hear from any Millstone readers who may know the history of this oak row.

Do you have a notable or favourite tree?  Readers are invited to submit their nominations for an honour roll of trees in our area that could be featured in future articles.  You can contact me at 613-256-2018, <ve3nce@rac.ca>, or Neil Carleton, 3 Argyle Street, P.O. Box 1644, Almonte, Ontario, K0A 1A0.  I look forward to hearing from you.

My volunteer columns started in March 2010, as print features, to support the tree planting and tree awareness initiatives of the Mississippi Mills Beautification Committee.  The contact for the Tree Working Group is Ron Ayling, 613-256-4617.  In Carleton Place, the contact for the Urban Forest / River Corridor Advisory Committee is Jim McCready, 613-257-5853.

Until the next column, you’ll find me looking for and hanging out with local shady  characters.