Way up here in the northern hemisphere, the winter solstice occurs when the Sun appears at noon at its lowest altitude above the horizon.  It’s the shortest day of the year.  Although the arrival of abundant snow prevented any terrestrial observers in our area from getting a direct view of the Sun’s position on Friday the 21st, it didn’t hinder the annual solstice celebration in Almonte.

Each year, Al Potvin has a large brush pile ready on his property at 38 Carss Street.  Many people in town are familiar with his volunteer work for the Almonte General Hospital.  Residents drop off their fall leaves and Al turns the huge pile into rich fertilizer for yard and garden use.  After about a year, the fresh compost is placed in a large bin at the end of his driveway.  Al sells the compost for two dollars a full blue box, and all the proceeds are donated to the Hospital.

Others know Al as a member of the Mississippi Valley Field Naturalists (MVFN) who organizes the building of bluebird nesting boxes each year.  They’re sold as a fundraiser for the club, and every MVFN bluebird box you see in Lanark County has his prints on it.  In June 2012, he was presented with the prestigious Champion for Nature Award in recognition of his contributions.

This year, Al’s brush pile was enormous.  Here’s a link  to the Millstone posting of December 17th with Noreen Young sizing up the accumulation. Even in the driving snow, the glow of the early fire could be seen beyond the neighbourhood.

Town residents walking to the solstice fire through Friday night’s deep snow were guided by candles along the trail.

As the fire grew in size and intensity, those in attendance stepped farther and farther back from the heat.

Some people brought thermoses of hot tea or coffee and, sometime around 8:00 p.m. under the gaze of a hazy moon, a big container of hot chocolate arrived with cups.  By then the number of glowing faces had grown well over four-fold.  As some families left for home, other people arrived with friends and neighbours.  If anyone felt chilly, a step or two closer to the fire quickly warmed up one side.  It was a drop-in event enjoyed by everyone.

It was also a good opportunity to conduct a laser experiment or two.  The object was to test the transmission of a green laser beam, from a handheld night sky pointer, powered by two AAA batteries, through thick smoke and then blowing snow.  Various people took turns operating the device while photos were taken to document the results.

The lighting of a winter solstice bonfire is an ancient tradition.  In pre-Christian times, fires were lit in Scandinavia during the Feast of Juul to symbolize the heat, light, and life-giving properties of the returning sun.  The Yule log of more recent times is a remnant of the bonfires set ablaze across Europe at the time of winter solstice.

Some communities include singing and music at their winter solstice bonfires.  Down under, in Melbourne, Australia, at the Collingwood Children’s Farm, fire twirling was a big hit before the 2009 bonfire was lit.  Here’s the link to a 5 min 22 sec youtube video of the event. 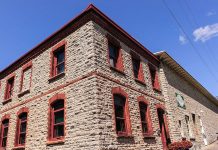 Help push ‘Hike for Hospice’ past its fundraising goal