A Cottage in The Twilight Zone

Reflections from the Swamp Dear Reader Recently my bride...
Councillors' ForumWho Pays the Highest Taxes: Not Us!

Who Pays the Highest Taxes: Not Us!

Let me bust a few tax myths. I often hear people say that Mississippi Mills homeowners pay the highest property taxes in the region. That is not true. Neither is it true that more industry and commerce automatically lowers residential tax rates.

As the image of residential tax ratios below shows (source: Lanark County), Mississippi Mills was in the middle of the pack for property tax rates in Lanark in 2016: three municipalities charged less and four charged more. Property taxes per property are the MPAC assessed value times the tax rate. A one percent tax rate equals $1000 in taxes per $100,000 of assessed value. 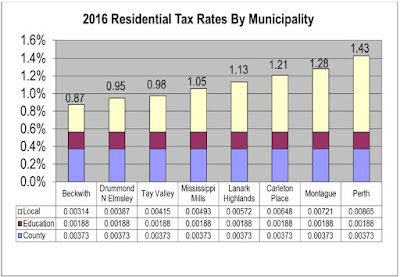 Our property taxes are made up of local/lower-tier (includes policing), education, and county/upper-tier. The education and county rates are the same for each—only the local tax rate varies. For example, a residence assessed at $400,000 paid tax in 2016 of: $3,480 in Beckwith (lowest); $4,200 in Mississippi Mills; $4,840 in Carleton Place; and, $5,720 in Perth (highest).
Mississippi Mills has maintained its position in Lanark County despite the necessary tax increases of the previous few years, as this 2014 chart shows: 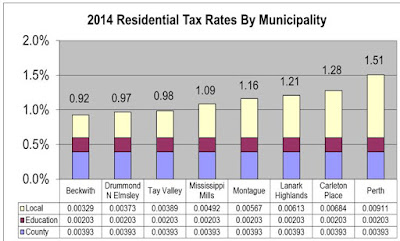 (Are you curious as to why our tax rate dropped between 2014 and 2016 compared to some of our neighbors? Since the MPAC assessed value of our properties has risen, the rate came down so the town collected only the taxes needed.)
Industry
I have often heard local pundits say that Mississippi Mills needs more industry to drive property taxes down. More industry would be nice but the effect on taxes is not direct. Carleton Place and Perth both have four times the total industrial/commercial assessment of Mississippi Mills; yet, they both have higher residential tax rates.
Ottawa Comparison
I have also heard people say property taxes are cheaper in Ottawa. It is harder to compare because Ottawa is a single-tier and has different rates based on services. A rural area with limited OCTranspo and a volunteer fire department has a tax rate (including police and education) of .905; so the taxes on a $400,000 residence would be $3,620. The same house in an area with full transit and full-time firefighters has a rate of 1.052 or $4,208 for a $400,000 home. Try it yourself using the Ottawa tax calculator at: http://ottawa.ca/cgi-bin/tax/tax.pl?lang=en
Share
Facebook
Twitter
Pinterest
Email

The Mayor’s final address to Council

Note of thanks from Christa Lowry

A Cottage in The Twilight Zone

Puppets Up is back!