Shardlake, Sarjeant-at-law. The barrister rank of Sarjeant was an ancient and senior one which accorded the recipient certain privileges, including the exclusive right to plead in certain English Courts. The position was extinguished in the 19th century to be taken by that of King or Queen’s Counsel, although the privileges attached vary.

The series, which began with the novel Dissolution, traces the various adventures of Sarjeant Shardlake of Lincoln’s Inn, one of  the English Inns of Court which were and continue to be  associations for barristers in England and Wales,during the rule of Henry VIII. Dissolution is set in the period of the dissolution of the monasteries at the behest of Henry and his close advisor Thomas Cromwell. Lamentation occurs much later, near the time of the death of Henry, in 1546 (Henry VIII died in early 1547). Catherine Parr is his sixth queen and stepmother to Henry’s children: the heir, Prince Edward (by Jane Seymour), Princess Mary (by Henry’s first wife Catherine of Aragon) and Princes Elizabeth (by Anne Boleyn). She is loved by the King who married her as a widow in her early thirties and she is an elegant and sophisticated woman, but she is in grave danger. This is a time of wild swings between recognition of the ritual elements of the Catholic mass (the Conservatives), although Henry has declared himself, not the Pope, the head of the church, and the acceptance of reforms in elements of worship as well as a belief that believers could have a clear path to God, not dependent on the intercession of the mass.  Henry’s loyalties veer widely in this last year of his life. At the moment of the novel, to assert that the wine and wafer of the mass do not become the actual body and blood of Christ (the doctrine of transubstantiation) in the process is heretical and is  punishable by burning at the stake.

The novel opens with just such a burning. Sarjeant Shardlake is forced to attend it as a senior representative of Lincoln’s Inn and the description is vivid. This highlights the seriousness of religious disagreement with the king’s views and against this background, Shardlake is asked by the queen to retrieve a manuscript she has written, Lamentation of a Sinner, which, while reformist, does not actually address the mass. The problem for her is that the volatile Henry may view her writing this without his knowledge as a betrayal, if not heresy and treason, and she could die like several of his wives before her.

Shardlake has a long history with the queen and knew her well before her marriage to Henry. He is obviously in love with her and cannot resist the dangerous assignment, as it is at her request and to help her. Thus the events of the novel are set in motion.

C.J. Sansom is an historian as well as an English solicitor. His historical fiction is based in fact. Although he invents scenes, he bases his Shardlake novels on actual contemporary or near contemporary accounts. The description of the burning, for example, is based on the contemporary Foxe’s  Book of Martyrs. All of the main characters at Henry VII’s court really existed and their characters in the novel match descriptions of them from those who knew them. Catherine Parr really did write Lamentation of a Sinner but it was not stolen.

For students of history who would like a detective story which is steeped in details of the real life of Tudor England, and for those who just want a good yarn, Lamentation is a good choice. 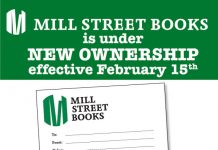 Final book in series on rural Lanark schools is released