Home Letters to the Editor The more things change, the more they stay the same

In observing the province’s response to Enerdu – Jeff Cavanaugh’s extraordinary plan to dredge the bottom of the Mississippi River to deepen it above the falls for his own personal gain, I am reminded of the axiom: the more things change the more they change the same.

I recently put together a family history for my terminally ill father. He was descended from the (colourfully named) Prisqui’ille Godefroy, who travelled north from Fort Detroit (then Lower Canada) to Smith’s Creek (now Port Hope) in 1811.

As your readers may know, Britain was anxious to secure Ontario/Upper Canada after losing the American Revolution.  United Empire Loyalists, those who fought for the British during that revolution, and their families, along with British aristocrats were induced to settle here by being offered massive tracts of prime land.

I tender the following excerpt from the history of Port Hope aka Smith’s Creek circa 1800.

‘The government had granted to Elias Smith Esq., father of the late John D. Smith, Esq. 600 acres of land, comprising Lot No’s 5,6, and 7 on which Port Hope is situated, with all the water privileges for a mile up the creek and a chain of land on each side from the centre of the stream, on condition that he erected a grist and saw mill’.

NB
My great grandfather (x5), a pale faced  Metis, was awarded 40 acres. Elias Smith’s ‘chain’ of river bank stood between those 40 acres and the creek/river.

Prisqu’ille failed to ‘prove’ or clear sufficient land within five years so the government took it back. He and his wife Hannah, oxen, cow and eleven children, resettled on 20 acres near Lake Simcoe. 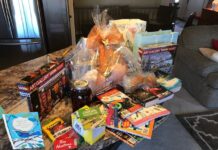 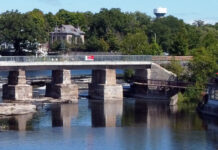 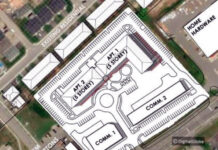