Many people think that marshes are just cattail, reed, and bug-infested wetlands that take up valuable shoreline.   But marshes contribute significantly to the biodiversity of ecosystems by providing critical habitat for a diverse range of plants, birds, amphibians, invertebrates and mammals.  When kayaking, the dense marsh vegetation presents a virtually impenetrable wall.  Our summer resident marsh birds are only visible when they venture out to the water/plant border of the marsh or fly above.  Patience and luck are needed to observe the birds and to photograph them.

An abundant bird associated by most of our cottage neighbours at White Lake with growths of cattails is the red-winged blackbird.  These sometimes gregarious birds are territorial during breeding season, building their nests and raising their young in the cattail marshes near our cottage.  Adults grow to 22 centimeters in length and weigh 52 grams.  They feed on a variety of insects and weed seeds.  The all-black adult males sport red and yellow wing epaulets which are most conspicuous during breeding season.  Females and juveniles are mottled brown.  This July 2020 picture was taken just after the adult male fed a moth to its chick.

Another common bird that raises its family in cattail marshes is the marsh wren.  This small bird grows to 11 centimeters in length and weighs only 11 grams.  Our field guides describe them as secretive.  They certainly can be difficult to spot as they nest and forage in amongst the cattails, moving rapidly through the vegetation in search of insects to eat.  Marsh wrens are brown with white stripes on their backs and whitish eyebrow stripes.  They have the characteristic slightly curved bill and ‘cocked’ tail common to all members of the wren family.   The picture of this adult was taken in late August. 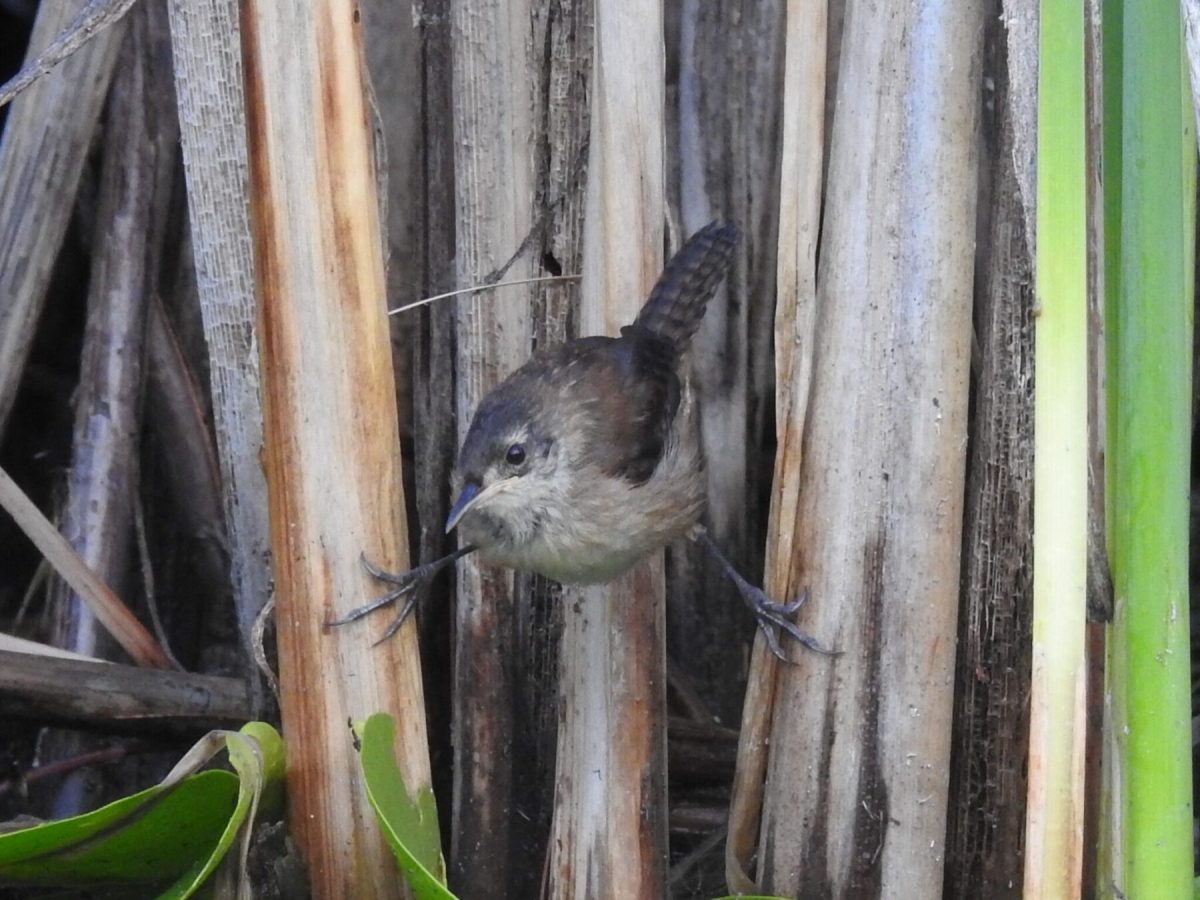 The swamp sparrow is another fairly common, slightly larger and plumper marsh bird which grows to 15 centimeters and weighs 17 grams.  This brownish bird has the characteristic short conical bill common to all sparrows but can be differentiated by its white throat and greyish neck and breast.  Swamp sparrows also build their nests and raise their young amongst the cattails.  They are one of the shyer sparrows, making them difficult to spot as they move about in the marsh vegetation hunting for insects and seeds.  This individual was photographed in early September.

The largest of the marsh birds observed near our cottage is the Virginia rail which can grow to 24 centimeters and weigh 85 grams.  This rusty-coloured bird sports a distinctive, long, slightly curved reddish bill.  It does most of its hunting near the plant/water interface as it feeds on marine worms, snails and aquatic insects.  These reclusive birds are very difficult to spot.  This summer at the cottage we had only two sightings.  The only useable photograph this year was taken on the same outing and in the same marsh as the swamp sparrow pictured above.

Our final bird-in-the-marsh, which we also frequently see in bushes along the roadside near the cottage, is the common yellowthroat warbler.  These small wren-like birds grow to 13 centimeters and weigh 10 grams.  They nest in dense vegetation, both in marshes and woodland shrubs. The adults have olive-coloured backs and a yellow throat and breast.  The male also sports a black mask.   These active birds feed on insects and spiders.  This beautiful female, perched on a cattail, was pictured in late July.

The next time you glance at a marsh and start to imagine what could be built on such a location if it were drained or the vegetation removed … think again.  If you take the time to look carefully you will be amazed by the diversity of plants and beasties.  In addition, marshes are an integral part of the Ontario landscape and they help slow shoreline erosion.  We have touched on five bird species hoping to encourage readers to appreciate the importance and biodiversity of our marshes.