You are cordially invited to our OPEN...
Your StoriesA Canadian story

Graham Lindsey shared this touching story on Facebook of a recent chance encounter on a Canadian train. He kindly allowed us to reprint it here.

An older British man sat next to me on the train home today. I worked on my computer for the first hour, then I fell asleep (four hours wasn’t enough after spending the evening with friends). Apparently I was asleep for the second hour. When I woke up, we struck up a conversation and soon he explained that his wife — the daughter of a war bride — had died just over two weeks ago. He was visiting her family in Toronto, Ottawa and Charlottetown. Of course, I extended my sincerest condolences, and I we talked about her for a while, I learned about the inoperable brain tumor the doctors found when she thought she had had a stroke.

He told me about the time he boarded the flight two weeks ago and answered the question “are you traveling alone?” For the first time in decades that the answer was ‘yes’. He said he felt badly because he began to cry and the lady who asked that innocent question didn’t know what she’d done.

After some time passed, maybe an hour, we were talking about other things (he was shooting photos of the beautiful fall colours on our way from Toronto to Ottawa, and I showed him a couple of photos of some maple leaves that I had shot when I was at my friend Dayna’s house). He interrupted something we were saying and said that obviously he was sorry to have lost his wife, but he had realized that he’d also lost his connection to Canada — he didn’t have anything that was Canadian anymore. I honestly didn’t know what to say. I’m proud to be from here, and I believe he understood that it meant a lot to me as well. As we pulled into the station and I gathered my things, we said a very heartfelt and knowing “safe travels” and “I wish you all the best”. I handed him a large, perfect, pressed red maple leaf and said “I’d really want you to have this.” 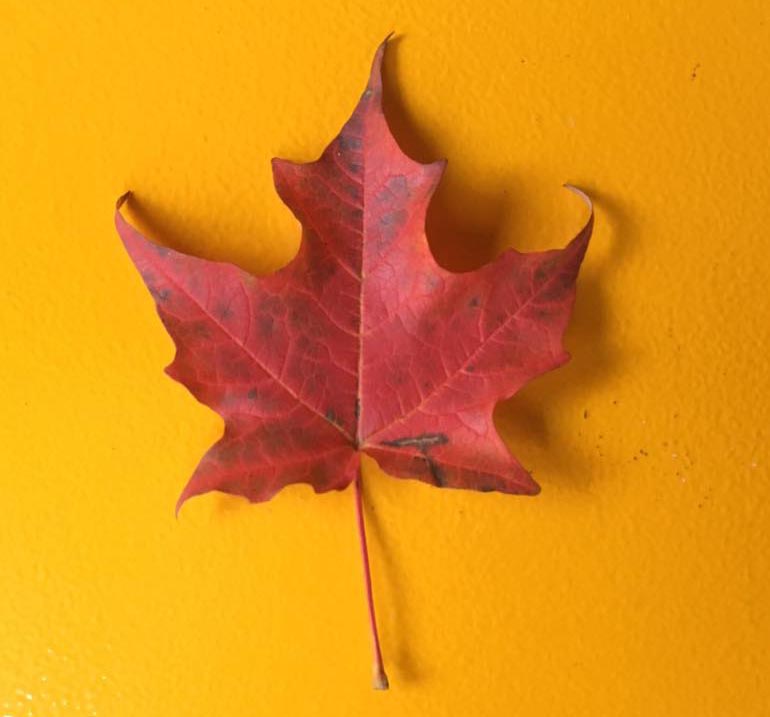 I’m so profoundly thankful I had saved that leaf — and I had no idea what I’d do with it when I packed it this morning.

Now he’ll always have a tiny piece of Canada.

I’ve attached a picture of that leaf.

I’m feeling pretty fortunate right now. Sending love to all my friends and family, and thinking of those who aren’t well.

WIT … Warbling in the Woods?