I decided in the past week that it was time to deal with the 30 or so geraniums that had been hanging upside down in my basement since I had brought them indoors in the third week of October. I had pulled them up with roots mostly intact, tied them in bunches of about six plants just as they were leaves and all and hung them from the ceiling joists in the basement. As in many older Almonte homes it is about ten feet square with a five foot ceiling fashioned out of bed-rock – the average winter temperature is about 17 degrees. I brought them out of the basement and threw them in a pile. As shown in the photo they looked mostly dead. 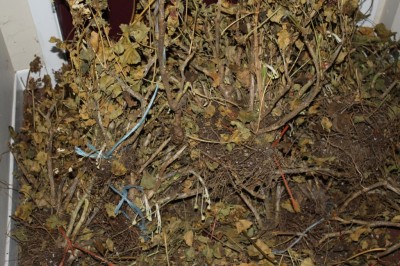 I cut the stems to about four inches, cutting out completely any stems that were obviously dead and cut the roots back severely. Some of the larger plants with six or more stems I pulled them apart ensuring that each part had some roots on it. As shown in the following photo the two plants on the left were the result after a large plant was separated. The plant on the right shows no sign of life (no green at all showing in the cut stems). Surprisingly with only a couple of exceptions the plants showed strong signs of life.

From the 30 plants I was able to obtain 40 dormant plants (by splitting several of the larger plants) that I judged to have a good chance of surviving and growing into healthy vigorous geraniums ready to plant outside by mid-May. The next photo shows the 40 little dormant plants ready to pot up. The following photo shows the final product. I used five-inch round plastic pots filled with a soil-less potting mixture made mostly from peat moss and vermiculite. This is porous and will drain well so I don’t have to worry about the little plants rotting. I will keep you posted on how many of the 40 plants grow and thrive. My record last year was 30 beautiful plants ready for the garden out of 50 that were started.

Let me just remind you of the Neighbourhood Tomato fund raising project. We have launched a sale of rain barrels in conjunction with the sale of trees by the Chamber of Commerce.  We are now accepting pre-sale orders for a Fundraising Truckload Rain Barrel Sale scheduled for SATURDAY, APRIL 26 at the Town of Mississippi Mills municipal garage, 3131 Old Perth Road, Almonte, ON from 9am to noon. Rain barrels are being sold for $55 each or two for $110.

All orders must be placed online in advance at www.RainBarrel.ca/tomato or by calling Deanna at 613-256-7535 or e-mailing deannabarry@storm.ca

For sale: 4 self-watering planters, $30 for all

A look back at the Pakenham General Store