June has come and gone with, it seems to us, more heat, more biting insects, and less rain than usual, but summer at the cottage is still always the best time of year because it opens our minds and eyes to the possibilities for the next few months. Now that we have started periodic visits to the cottage we revel in seeing all the animals, birds, and insects, including of course the butterflies.  For a little bit of colour, let’s focus today on the butterflies we always see in June.

The first and perhaps our favourite butterfly is the Canadian Tiger Swallowtail with its overall bright yellow impression and black veining, simply popping against the purple creeping thyme in the cottage ‘lawn’.  We chose this particular photograph because it illustrates so well how this butterfly fulfills its crucial role as a pollinator. The rust-coloured smudges we see is pollen from which plant we do not know, but it will be spread helter-skelter throughout the area.’

Another common June butterfly is the lovely dark orange-coloured European skipper, an invasive species introduced to North America near London, Ontario in 1910 in contaminated timothy grass seeds.  We love to see it for its beauty, but according to the federal government’s butterfly site its larvae represent a problem for hay farmers as far north as Rupert River, Quebec (east of James Bay). It’s pretty though, isn’t it? 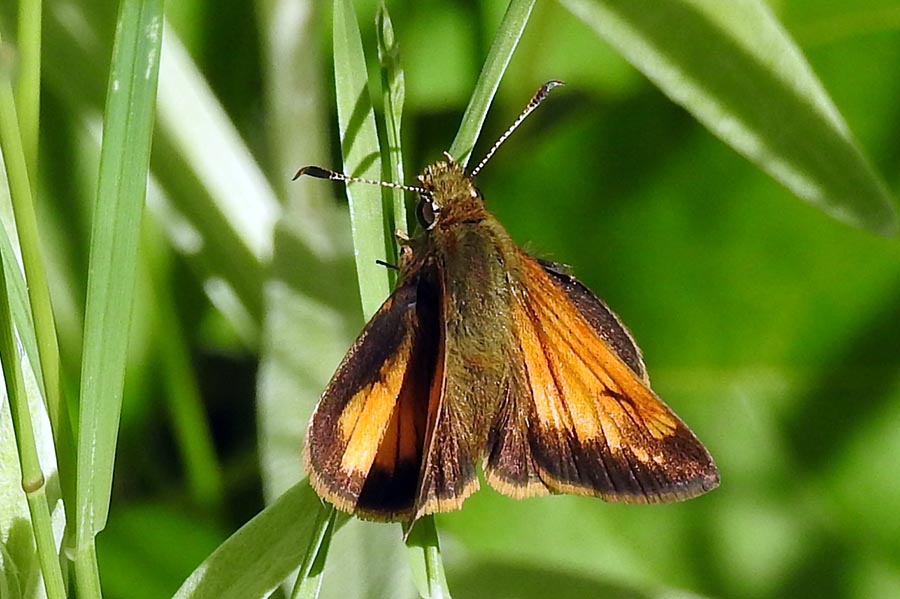 Another lovely June skipper is the northern cloudywing butterfly.  It gives a generally brown impression even with its irregular translucent spots on the leading edge of its forewings.  Being native to North America it has developed a camouflage rendering it a challenge for our old eyes to spot. Sometimes we confuse it with the duskywing, but once we have the enlarged photograph on our desktop screen and our trusty Cavasin guide in one hand, its identity becomes clear. When we see the northern cloudywing, it is usually nectaring at roadside flowers.

We have been writing wildlife articles for the MillstoneNews for almost four years and have mentioned both the northern crescent butterfly and the pearl crescent on occasion. Still though, despite research, study, and squinting, we still find it difficult to differentiate definitively between the two. The Canadian Biodiversity Information Facility (CBID) website tells us the two are similar.  We agree.  You can find an interesting discussion on this matter on bugguide.net.  The pair of beautiful butterflies shown below have been confirmed by Bugguide experts as northern crescents.

We love to see the young birds and animals, as well as the flowering plants and insects that visit the plants at the cottage in June, but something about the butterflies makes us smile most of all.  Watching the butterflies, we escape in our own flights of fancy as they move from flower to flower.