Home Science & Nature What is That? What is that … Rudolph or Bambi?  … a fanciful tale.

Santa has a secret and we know what it is.

We always watch for whitetail deer when we are motoring along the byways of Lanark County.  No one wants to crash into one; it is hard on the car and passengers, but can be devastating for the deer.  At this time of year we also keep an eye out for Santa’s reindeer, both along the roads and in the sky.

Scientists place whitetail deer and reindeer in the same family.  They are distantly related … we say ‘cousins’.  We think that during their off-season Rudolph and his teammates visit Bambi to enjoy the Lanark summer.  We do not have any hard evidence, just suspicions.

Whitetail does give birth to their fawns late in the spring.  At White Lake, this usually means mid to late May.  Shortly after birth, newborn fawns struggle to their feet to nurse.  Since whitetail deer are prey animals, it is important they be able to run from their predators as soon as possible.  The following photograph was taken June 17 this year.

In 2013 and 2014, we were thrilled to see a doe with triplets cavorting on the green space between the cottage and shore. (The first time we saw triplets, Carolyn almost spilled her morning coffee.)  This is where our theory about Rudolph comes in.  The books tell us that occasionally whitetail deer have twins, and this is a sign of a healthy environment for deer.  Triplets are a rarity.  Maybe our bleary eyes were not able to discern that one of those fawns was actually a visiting reindeer … Rudolph.   Not possible?

We often see deer tracks on our sandy shoreline, up our lane, and along the shoulder of the road.  Being related, reindeer and whitetail deer have very similarly structured feet and therefore footprints.  We could not tell if a particular print belongs to Rudolph or Bambi.  We can, though, tell by the big ears, antler buds and black (not red) nose that the following photo is of a male whitetail deer probably in its second year.

By July, fawns are wandering a little further from their mothers, but this doe kept a keen eye on our intrepid photographer lest he get too close to any of her charges.

By mid-August, a buck’s antlers are beginning to be clearly discernable, even from a distance.  We seldom see deer swimming in the lake, but by October, the bucks are beginning to think of making babies, and the whiff of a doe across the bay will motivate a buck to take to the water to find her.  The picture of the swimming buck was taken on October 12, in the pre-dawn mist.  Although he does not show up well, the photograph provides a record of this whitetail deer behaviour.

Getting back to the visiting reindeer theory, another indicator that Rudolph spends time in Lanark is this sign along Bellamy Road, a landing beacon for Santa and his reindeer. 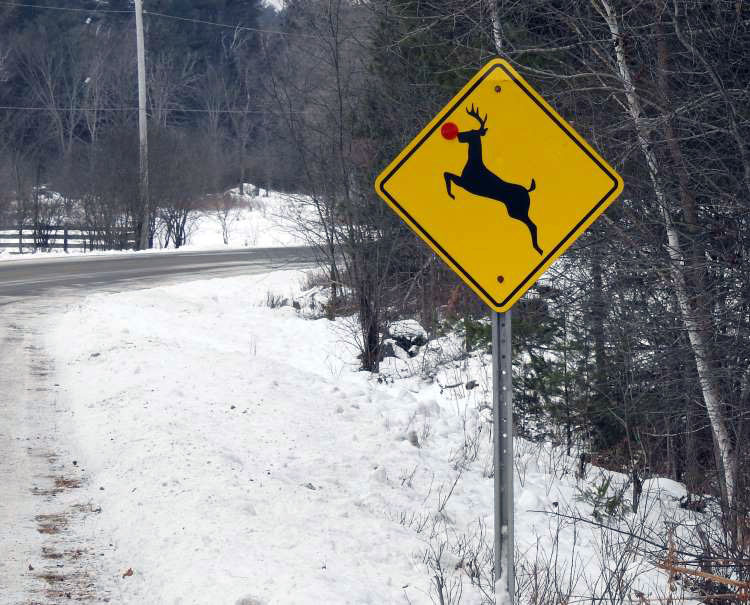 Not much research went into this article, but we did receive some useful advice from one of our nephews who hunts. (He hasn’t seen Rudolph since he was a kid.)  Also, the following two websites provided some interesting reading: www.uaf.edu/files/snras, a University of Alaska site; and, reindeerherding.org/tag/canada which is a Norwegian site.

What Is That … Flycatcher?

What Is That … Welcoming Committee?