There is more to coyote sightings in eastern Ontario than a Sens game with the visiting Phoenix team at Scotiabank Place. Although not many people may have seen them the other night, coyotes were on the prowl again close to suburban neighbourhoods in Almonte. Their distinctive yelping, a not uncommon local sound, was easy to hear from yards or homes in the water tower area as they hunted in nearby fields.

Coyote sightings in towns and cities are often reported as news of some concern or alarm. In fact, their greatest concentrations in Ontario are in urban and suburban areas. This information was part of a recent presentation by Dr. Brent Patterson, called Coyotes and Wolves in Eastern Ontario: Friend or Foe?, at the March 10th AGM of the Mississippi Madawaska Land Trust Conservancy in Lanark.

A long time scientific researcher with the MNR, he was invited to speak on the topic in an effort to dispel common myths with scientific information about wolves and coyotes in Ontario. Dr. Patterson is an adjunct professor in environmental and life sciences at Trent University, in Peterborough, and has extensive research experience studying the populations of wolves and coyotes. 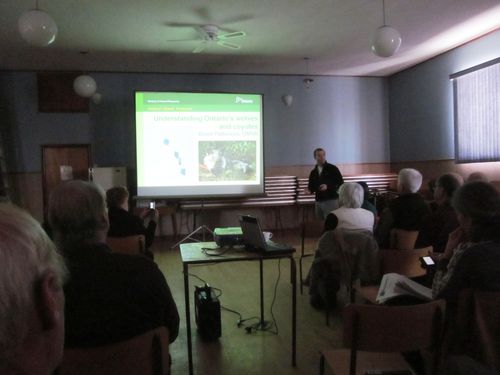 Maps, charts, graphs, and photos were included in Dr. Patterson’s March 10 presentation about wolves and coyotes in Ontario.

Coyotes, he explained in his introduction, had a limited range in Canada when European settlers first arrived. They were restricted mostly to the southern prairies, until about 1850 when extensive changes were made to the eastern landscape of the continent for farming. Their range now covers almost all of North America.

Eastern and gray wolves, on the other hand, which were once found all over the continent, are now relatively restricted in range due to intense persecution. We haven’t been able to do the same to coyotes, Dr. Patterson noted. One of the main reasons for the current distribution of populations is the hybridization of wolves and coyotes in Ontario.

Dr. Patterson’s research, based on genetic sampling, has shown that coyotes will mate or hybridize with eastern wolves, and eastern wolves with gray wolves, but gray wolves and coyotes don’t hybridize. Eastern wolves, it turns out, allow gene flow from the smallest coyote to the largest gray wolf in Ontario.

The attentive audience learned too that the most common wolf in Ontario, known as the Great Lakes wolf, is a gray/eastern hybrid. A population of about 200 eastern wolves are concentrated in Algonquin Park. They can be found as well in some small areas around the Park.

Identifying wolves and coyotes at a glance in the field can be a challenge at times due to their range of hybrid sizes. To find a pure gray wolf in Ontario, you’d need to look in the lowlands of Hudson Bay. At the top end of the size scale, Dr. Patterson has trapped and attached a GPS radio collar to a male in that region weighing 140 lb. Eastern wolves are smaller than Great Lakes wolves, with females weighing 45-55 lb. and males in the 55-75 lb. range.

The basic social unit for coyotes is a mated pair with the pups of the most recent litter. For wolves it’s a breeding pair plus pups from various litters, like the pack of 14 members Dr. Patterson studied in the Lake Nipigon area. The largest wolf pack he knew of in northern Ontario had 19 members.

To be successful in raising pups, both coyotes and wolves need to establish a distinctive territory. The size of the territory is related to the amount of available food, as well as the body size of the animals. In the southern part of the province, for example, there are 30 to 40 coyotes per 100 square km. Population density can be higher in cities. Coyotes thrive in suburban and even industrial environments where food is plentiful.

Although it’s possible that eastern wolves could be sighted here, the distribution map presented by Dr. Patterson clearly showed that our area is well away from typical territories where wolves have been studied by wildlife researchers. He outlined that we have mostly eastern coyotes and eastern coyote/wolf hybrids here, with adult females weighing on average 35 lb. and males about 40 lb.

This local coyote was photographed in a field on the Thompson farm along the 7th concession between the Rae Road and the Drummond Road.  Image courtesy of Karen and Bruce Thompson.

Breeding is finished now, and it wouldn’t be uncommon to see a coyote or two hunting in a field, or along a fence row, especially if you’re traveling along rural byways in our area. Keep your ears open for the symphony of howling, yipping, yelping, and barking that announces the nearby presence of one of nature’s most adaptive creatures on the continent.